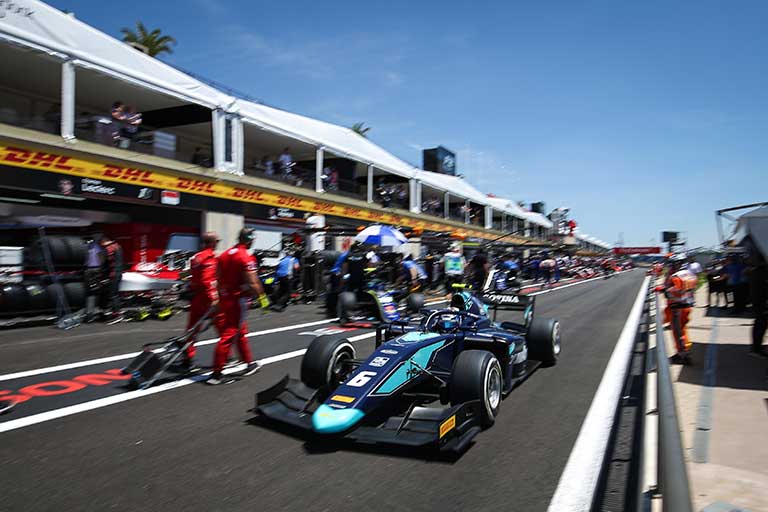 DAMS drivers Alexander Albon and Nicholas Latifi earned a trio of points finishes between them in the fifth round of the 2018 FIA Formula 2 Championship, despite a challenging weekend at Le Castellet.

Another strong qualifying performance from Thai-British driver Albon saw him line up second for Saturday’s Feature event, however his race was truncated by a throttle valve motor reducer issue. Starting race two from 17th, Albon recovered well to finish seventh, adding two points to his tally.

Canadian driver Nicholas Latifi charged through the field after spinning in damp conditions on the opening lap of race one, coming home seventh. Starting from the front row for race two, Latifi jumped into the lead off the line, before contact on the final lap dropped him to eighth position.

Alexander Albon:“In free practice we had a throttle fault, which put us on the back foot for qualifying. The team did an excellent job to give me a strong set-up, and second was a great result, sadly it ended our streak, but we were positive despite the problem. Race one pace was good, and we ran to strategy, prior to suffering another throttle issue. In race two we made a step in the right direction with the car, but two points from the weekend isn’t where we want to be, however, we’re positive going forwards.”

Nicholas Latifi:“After missing winter testing here, I was playing catch up in practice to get my eye in. We made some improvements for qualifying, and tenth wasn’t the worst result for us. I had contact at the start of race one, so taking seventh was a nice recovery. In the Sprint Race I made a great start, but we struggled to balance pace and tyre wear, which made the final laps really tough. Eighth is a disappointing result given we were leading, but we’ll analyse it and comeback stronger in Austria.”

François Sicard, Managing Director:“In terms of results, this weekend was disappointing, but we showed a high level of performance again, with Alex earning his fourth consecutive front row start. Alex’s Feature Race was ruined by a technical problem, but Nicholas had a great race to take seventh. In race two, Alex made some great overtakes to finish seventh, but we have to investigate some areas of Nicholas’ race. We need to build on these performances next weekend to realise our point-scoring potential.”

Next race of the 2018 FIA Formula 2 Championship will take place in Spielberg, Austria (28-1st july).