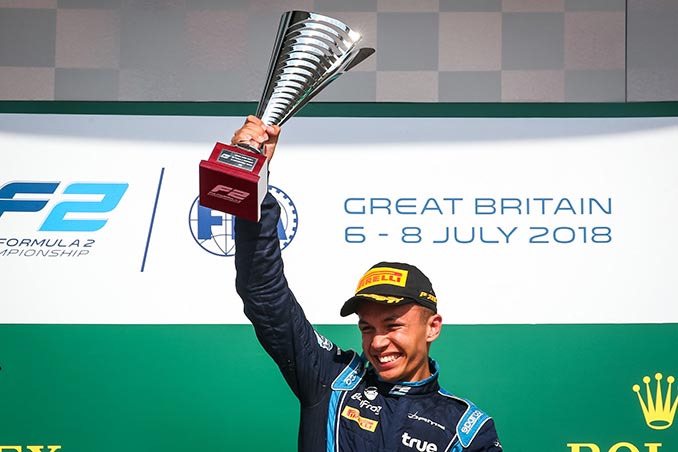 DAMS scores second victory of the season at Silverstone

British-based Thai driver Albon qualified on the front row for the fifth time in 2018, lining up second for the Feature Race. After battling for the lead early on, he jumped into first during the pit-stops, before managing the gap to take victory. In race two, he added further to his points tally, finishing seventh.

Limited running saw Nicholas Latifi qualify 16th for the weekend’s first event.  In race one, the Canadian ran in contention to score points, before dropping back due to high tyre wear. Starting Sunday’s Sprint Race from 17th, Latifi suffered from contact on the opening lap which hindered his progress.

Alexander Albon:“I was really happy to find form in qualifying again by taking second. After the Red Bull Ring, we needed to fight back, and we did a good job to get on to the front row. We had great pace in race one, so when we pitted, I knew we had the chance to win. The team did an excellent stop, and from then I could manage the pace and it was relatively comfortable. Race two was very tough, we struggled with grip, but should have finished better. We’ll look at the data, and find a solution going forwards.”

Nicholas Latifi:“I made a mistake in practice, which meant I only did a single flying lap, putting me on the back foot for the remainder of the weekend. Our goal in race one was to get into the top eight, but I pushed too hard and the tyres dropped off after we were battling for points. I had contact on lap one of the Sprint Race that caused floor damage, and we struggled for grip throughout. We’ll analyse everything, get some answers, and come back looking to score some points next time out.”

François Sicard, Managing Director:“It’s been quite a good weekend for DAMS. Alex performed brilliantly in qualifying again, showing our one-lap speed. The fantastic work of the mechanics in race one was the key moment that allowed Alex to take a highly satisfying win. Unfortunately, the weekend wasn’t easy for Nicholas, and Alex also struggled in race two, so despite taking encouragement from the win, we need to work hard on finding the problems in order to take our overall performances to the next level in Budapest.”