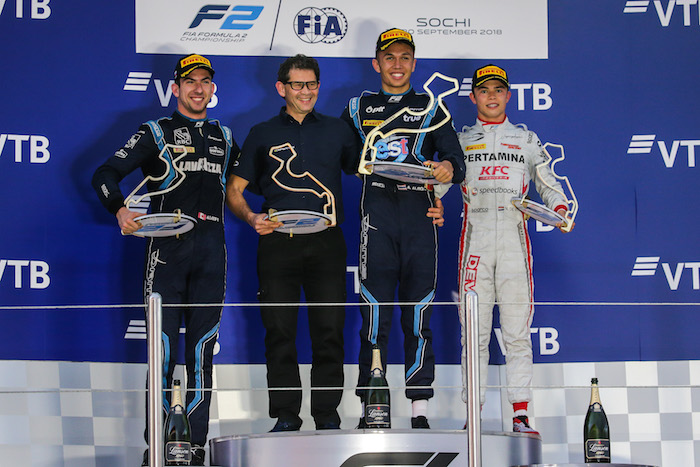 Alexander Albon and Nicholas Latifi earned a spectacular one-two finish for DAMS during the 11th round of the 2018 FIA Formula 2 season at the Sochi Autodrom, Russia.

After qualifying fifth for the weekend’s first race, Albon’s efforts were complimented with a rapid pit-stop from the DAMS crew, allowing him to take his fourth win of the season. In race two, the Thai-British driver climbed from eighth to take another podium with third, despite tricky damp conditions.

Starting Saturday’s Feature Race from fourth, Latifi made a brilliant post-pit-stop charge to secure a second-place finish. Taking the start of Sunday’s event from seventh, the Canadian made a great getaway to run second by Turn 4, only for his race to be ended later on the opening lap after contact.

Alexander Albon:“I could tell we had the pace to win immediately in the Feature Race and after the team performed a fast stop putting me in the net lead, it was quite a comfortable victory. It was really nice to give back to the team with a one-two after all their hard work. In race two our dry pace was strong, but when it rained we couldn’t maintain our advantage. It was still a good points haul and coming away with second in the drivers’ standings is great, so hopefully we can finish 2018 on a high.”


Nicholas Latifi:“Overall it was a good weekend for me, beginning with my best qualifying of the season. I made a strong start in race one, but was squeezed a bit on the run down to Turn 2. After that, our pace especially on the soft tyres was excellent, and to be able to reward the team with a one-two was great. In the Sprint Race I made another really good start, but was taken out when running second at Turn 5. It felt like a missed opportunity, because I had the pace to win today. We’ll look to rebound in Abu Dhabi.”

François Sicard, Managing Director:“It’s been an excellent weekend for DAMS and we’re delighted with the results. After qualifying fourth and fifth, we knew our pace was good, which was confirmed in race one as both drivers performance faultlessly to take a magnificent first and second. Alex continued his form in race two with third, while Nicholas was really unlucky with contact while second. The performance of the entire team was fantastic all weekend, and we hope to achieve more good results in the season finale.”

The final round of the 2018 FIA Formula 2 Championship takes place at the Yas Marina Circuit, Abu Dhabi (23-25 November).