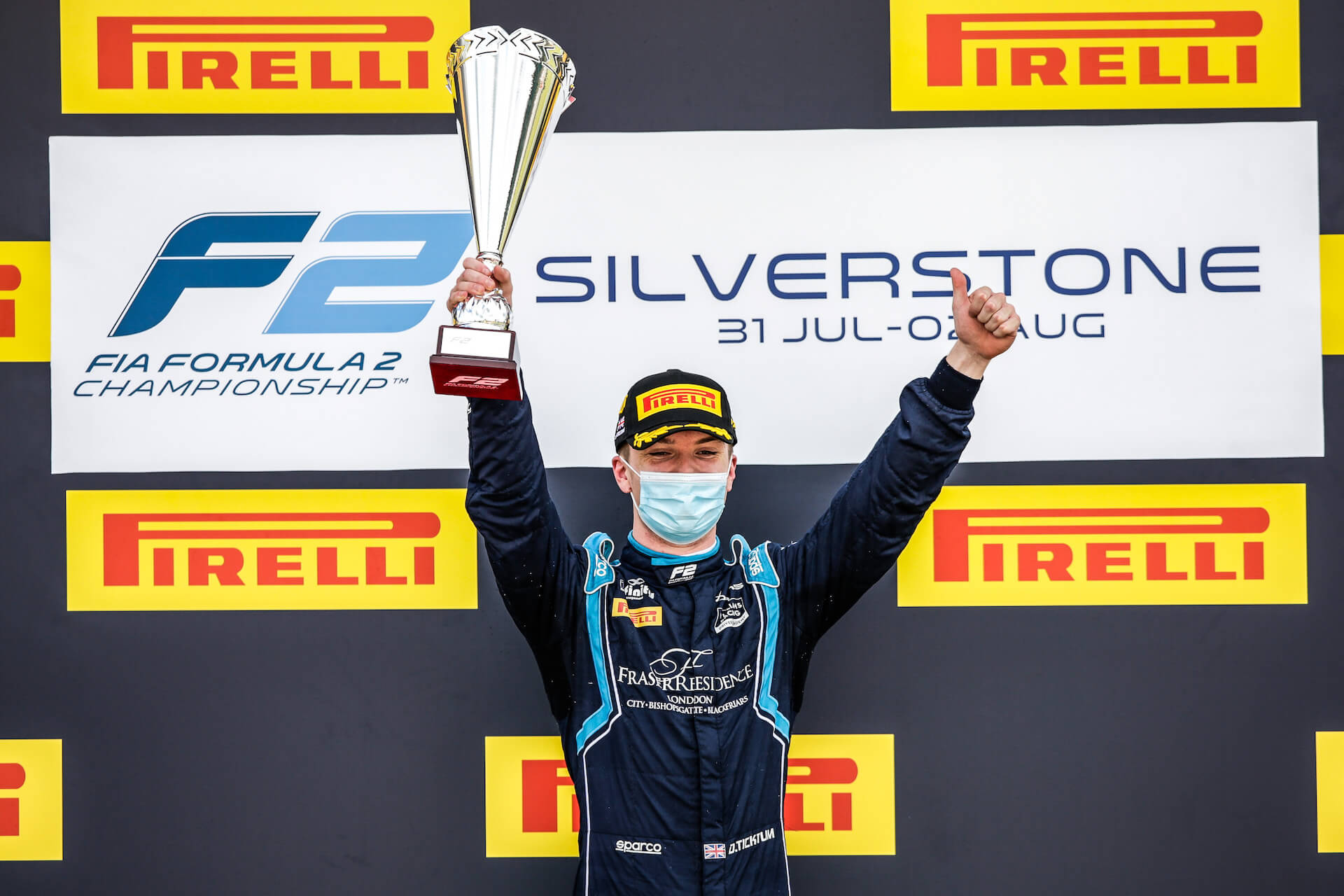 Dan Ticktum took a lights-to-flag maiden FIA Formula 2 Championship win at his home event at Silverstone in Sunday’s Sprint Race, the first of the season for reigning teams’ champions DAMS, having secured reverse grid pole in the Feature Race. The result fittingly came on the eve of the first anniversary of DAMS team founder Jean-Paul Driot’s passing.

Dan Ticktum: “The first win of many I hope! The start today was very good, it’s really encouraging to see we have pace in the first few laps. We’ve struggled before so we changed our warm-up strategy this weekend. After that I just had to control the race, particularly the front tyre degradation, and I was able to pull a gap. The end was a bit tricky with Lundgaard chasing on fresh tyres. For the last three laps I was pushing like my life depended on it. We still have areas to improve, our one lap performance in qualifying wasn’t quite there but we recovered in the Feature Race to get reverse grid pole which was the target.”

Sean Gelael: “It was a difficult weekend for me. It was such a tight qualifying, a couple more tenths and we’d have started in the top 10. We had strong pace in the Feature Race but in the dirty air it was tough to overtake. We pitted under the late safety car in the Sprint Race so we could pick our way through the field but I left the box with a loose wheel and had to retire. It’s a shame because I know the team very rarely make errors and I know we can fight higher up. We’re staying positive and aiming to improve for the second Silverstone meeting.”

Gregory and Olivier Driot, Team Owners: “This is a very satisfying result. Our father passed away a year ago tomorrow and we are able to dedicate a victory to him, just as we did on the day of his death with Nicholas Latifi in Budapest. Wherever he is, he’d be happy to see us fighting to the end. It’s a great way to pay tribute to him.

“We didn’t qualify where we expected as we didn’t get the best out of the tyres in a very tight session. Our races were much stronger though. Dan recovered with our strategy of pitting early to eighth, which was the goal in order to start on pole in the Sprint Race. We led every lap of Sunday’s race, the late safety car threatened that as some tried pitting for fresh tyres but we managed to fend them off. It’s a great win, a fantastic job by the team and a good recovery.

“Sean deserved a good result this weekend. He had strong pace during the Feature Race but he was in dirty air, making it hard to pass. We made a good call to bring him in for a pit stop during the Sprint Race as this would have helped his recovery, unfortunately we made a rare mistake, we had to ask him to park the car and we are very sorry. Hopefully both drivers will be fighting near the front at the second Silverstone race in a week’s time.”