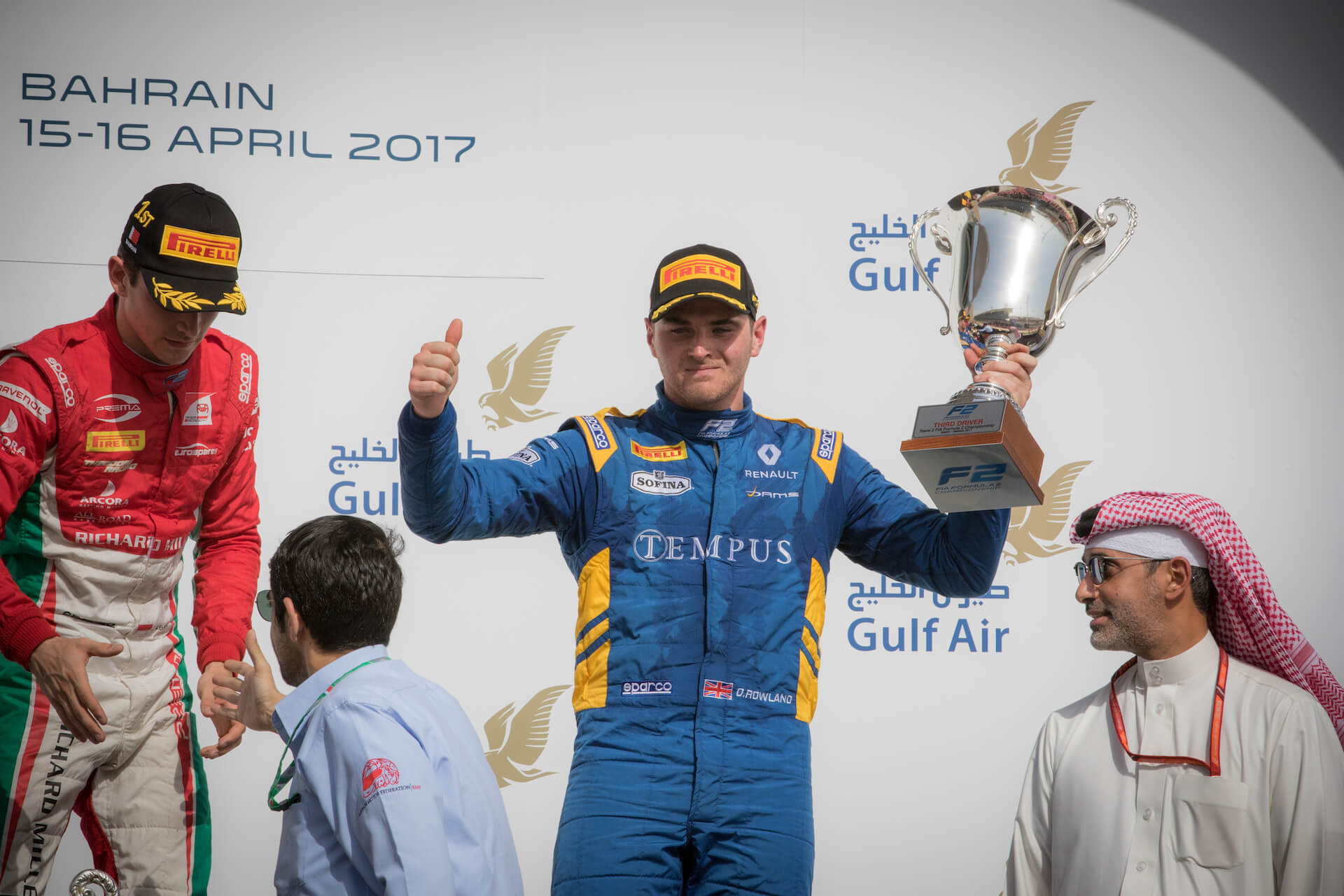 DAMS and new driver Oliver Rowland got their 2017 FIA Formula 2 campaign off to an excellent start with a podium finish in Bahrain (April 14-16).

A fifth-placed-finish in the Feature Race means that Rowland lies third in the Drivers’ Championship, with Latifi eighth and DAMS third in the teams’ standings.

It was a strong start to the weekend for Rowland, as the 24-year-old BRDC Superstar posted the fastest time in practice, and qualified eighth.

Latifi, who was quickest in the Bahrain pre-season test, was 13th fastest in qualifying, but the 21-year-old was confident of challenging for points.

Oliver Rowland: “In practice things felt good and I was happy heading into qualifying. The track conditions were very different and I had a couple of issues carried over from practice, which meant we were eighth. It wasn’t a disaster, but I knew we could have been higher.”

Nicholas Latifi: “We didn’t get the result we wanted in practice, especially as we topped pre-season testing here. Qualifying was a surprise. Nothing felt majorly wrong, we were just off the pace, but we know it’s the races that make the difference.”

Rowland fought through the field to fifth in Saturday’s Feature Race, putting him fourth on the grid for the sprint. The 2015 Formula Renault 3.5 champion battled hard throughout the 23-lap race to come home third, giving DAMS their first podium of the F2 era.

Having finished just outside the points in 11th on Saturday, Latifi capped off a strong weekend for DAMS, as he stormed through the field to cross the line in a fine fourth.

Oliver Rowland: “In the first race I climbed to fourth, but the tyres went off slightly towards the end and finished fifth. I didn’t have the best of starts on Sunday, but fought back really well and ended up on the podium, which is a great result and I’m happy looking ahead to Barcelona.”

Nicholas Latifi: “I made up a lot of places at the start of the Feature Race, but unfortunately had to pit earlier than planned because of a damaged front wing. We did a good job to fight back to 11th especially as I ran 19 laps on soft tyres. The Sprint Race was really strong. I made it up to seventh on the first lap and then picked my moments to attack while also looking after the tyres. The team performance has been good and it sets a high standard for the coming races.”

François Sicard, Managing Director: “Practice went really well, but qualifying was obviously not what we expected and it was disappointing not to be higher up. Oliver had a strong first race; he made the difference on track and fifth is great. I thought it was a very good performance by Nicholas, who made an excellent comeback after damaging his front wing. Oliver did a fantastic job to get a podium on Sunday. Nicholas had a really strong sprint race, he managed his tyres extremely well and to go from 11th to fourth is very impressive. Overall it was an encouraging start and the points were good, but we are hoping for more in the coming races.”