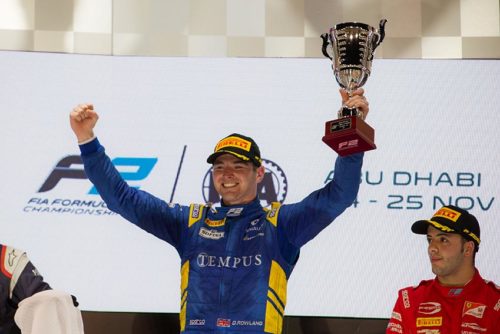 DAMS end 2017 F2 campaign with another podium in Abu Dhabi

DAMS closed out the 2017 FIA Formula 2 Championship with their 19th podium of the season, in what was a mixed finale for the French team at the Yas Marina Circuit, Abu Dhabi.

Nicholas Latifi capped off a strong campaign with third in the Sprint Race, as fellow Renault Sport F1 Development Driver Oliver Rowland had his Feature Race victory stripped off him after a technical infringement.

DAMS finish the season third in the Teams’ Championship, with Rowland third and Latifi fifth in the final drivers’ standings.

After going sixth fastest in practice, DAMS opted to send Rowland out during the mid-session lull in qualifying, with the British driver slotting into fourth place.

Off the back of another podium in Jerez, Latifi had a quiet start to the F2 finale, going 15th in the morning session, before improving to 12th in qualifying.

Oliver Rowland:”It was obvious that the pace was quite good on Friday, but I wasn’t able to put together the perfect lap in either session.”

Nicholas Latifi:”We could’ve been around the top five in qualifying, but I made a mistake on my second set of tyres and lost a lot of time, which was always going to make it more difficult in the Feature Race.”

Rowland stormed through to first after switching to the longer-lasting soft compound tyres in the opening race. He dominated thereon in to take victory, but was disqualified after the car’s skid plank as found to have excessive wear. The Yorkshireman produced an epic drive from the back of the grid to finish seventh in the Sprint Race.

Latifi also showed strong pace on the soft compound tyres later in the Feature Race, as he fought through to finish seventh – which turned into fifth after penalties were applied. The Canadian impressed during the Sprint event, as he scored his ninth podium of the season with third.

Oliver Rowland:”Overall, it was actually a really positive weekend. Obviously the penalty in the first race was difficult to take, but it was great to fight my way through the pack in the Sprint and show our pace. I want to thank François [Sicard] and everyone at DAMS for an amazing season.”

Nicholas Latifi:”I struggled with tyre management earlier in the Feature Race, but in the end we came on stronger. I had a really good start on Sunday and wanted to get the win for the team after Saturday’s disappointment, but we didn’t quite have the pace. Still, it’s great to finish the season with another podium.”

François Sicard, Managing Director:”It wasn’t the last round we were expecting. It’s a shame as everyone performed well and this small issue cost us the teams’ title. Nicholas had a very strong weekend and we are very pleased with his performance. The fact that 143 points separate DAMS and fourth in the championship, shows the level of the top three teams and it’s been a great battle all season. Preparations for the 2018 season begin at the test on Thursday, so that’s what we’re focusing on to give us the best chance of challenging for next year’s titles.”

DAMS will remain at the Yas Marina Circuit to participate in the official post-season FIA Formula 2 test (30 November – 2 December).