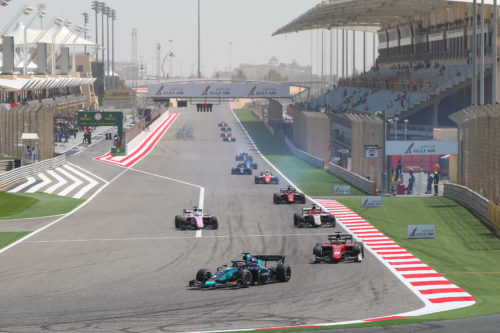 DAMS kicked off their 2018 FIA Formula 2 Championship campaign in Bahrain (6-8 April) with a points finish, despite having an otherwise frustrating weekend.

Alexander Albon, making his first start for DAMS, took a strong fourth-place finish in the weekend’s opening race, while both he, and team-mate Nicholas Latifi’s speed went unrewarded in the Sprint Race, with both drivers finishing just outside the points.
Practice & Qualifying

It was a positive start to the weekend for Albon, as the Formula 2 podium-finisher posted the fourth fastest time in practice, before going on to qualify third.

Latifi meanwhile, in his third season with DAMS, set the 12th fastest time in the weekend’s opening session, prior to qualifying 15th for Saturday’s Feature Race.

Alexander Albon : “In free practice it was evident we had made a big step with the new car from the test, and I believed that we could fight for pole. Despite a small mistake, I was really happy to qualify third, and looked forward to the race.”

Nicholas Latifi : “There was a lot more grip than I expected there to be in free practice, which meant I wasn’t on the limit. I was relatively happy with the car in qualifying, but I was caught out by traffic on my second run, which cost me a shot at being further up the grid.”
Races

Albon fought hard during the opening race of the weekend, ultimately finishing just off the podium in fourth. In Sunday’s Sprint event, Albon dropped back at the start, working his way up to 13th position at the finish.

After charging through the field from 15th to just outside the points in the Feature Race, Latifi was embroiled in a battle for the final points-paying position on Sunday, but had to settle for 10th after a frantic final few laps

Alexander Albon : “I made a bad start to race one, but managed to fight back and got stuck behind second, which would eventually cost me a podium. On Sunday I had another poor getaway, and excessive tyre wear in the latter stages. We have some homework to do, but hopefully we’ll be closer in Azerbaijan.”

Nicholas Latifi : “In the Feature Race we struggled with the tyres after making a small setup change, meaning I couldn’t get any further up the field than 11th. Stalling on the formation lap put me on the back foot for the second race, but our pace was good, and we were not far off of the points. We’ll move on from this weekend, and focus on having a strong weekend in Baku like we did last season.”

François Sicard, Managing Director : “Nicholas has not had the ideal preparation this season with his illness, but we were encouraged by the level of performance. Our speed was confirmed in qualifying, and we were on par with our competitors. Nicholas was blocked on his second run which compromised the remainder of his weekend. Fourth in race one was a strong result for Alex. Both drivers also showed encouraging pace during Sunday.”
Round two of the 2018 FIA Formula 2 Championship will take place in Baku, Azerbaijan (April 27-29).