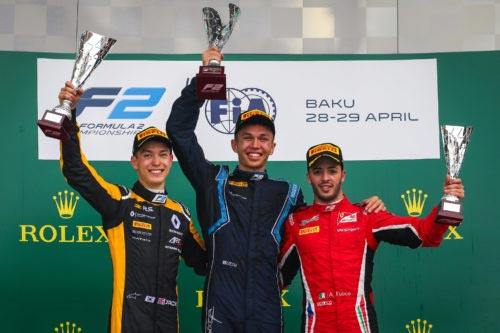 Thai-British driver Albon took pole-position for Saturday’s Feature Race on the Baku Street Circuit, before resisting pressure from behind to earn his first F2 race win. On Sunday, the DAMS rookie’s strong pace went unrewarded, after a clutch problem at the start.

After an issue in qualifying, Latifi carved his way through the field from 20th to end race one in fifth place. Having made another a great start in the Sprint Race, the Canadian managed tyre wear well to take third, adding a podium to his first points of the season from the Feature Race.

Alexander Albon:“It was my first time in Baku, so track time was important and I didn’t get that in practice. I was really happy with the car, we had a good baseline and I was confident ahead of qualifying. Despite a few small mistakes, I was really happy to achieve pole. We played it safe at the start in race one, losing out initially but I fought back, our pace was great and to be able to take my first win was an excellent result. Race two was more difficult, we struggled with the start, so we’ll work on that for Barcelona, but overall it was a positive weekend, and we’re in the title hunt.”

Nicholas Latifi:“In practice the track conditions were tricky, but we maximised what we had ahead of qualifying. We got unlucky with yellow flags on the first set of tyres, and on the second set I pushed a little too hard and spun, which was not representative of where we should have been. I had nothing to lose in race one, so to recover to fifth was great, staying out of trouble and keeping calm. In the Sprint Race, I managed the pace to finish third, which really gets my season on track.”

François Sicard, Managing Director:“Overall, this has been a great weekend for DAMS, with our first pole position and win of the year. Alex did a really great job considering he didn’t race here last season. After his pole and win, he was unlucky on Sunday with the stall, which compromised his race. Nicholas produced two fantastic performances, after a tough start to the weekend, which will boost his confidence going forwards. DAMS is now second in the Teams’ Championship, and heading to Barcelona, a circuit we know well and has been resurfaced. we’ll be looking to build on these fantastic performances.”