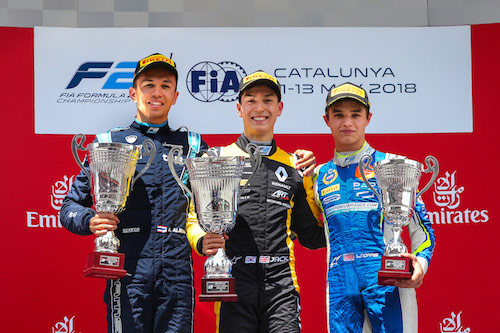 Another pole position and podium for DAMS in Barcelona

British-based Thai Albon took his second pole position of the season ahead for Saturday’s Feature Race, going on to finish fifth. Starting from fourth place for race two, Albon jumped to second in the early stages, dealing with numerous safety car and VSC restarts to maintain his second podium of the season.

After qualifying a season-best sixth place, Latifi set the fastest lap of the Feature Race as he recovered to 14th after an issue at the start. On Sunday, the Canadian made a fantastic comeback drive to earn his third points finish of the season with eighth position.

Alexander Albon:“It was a really good weekend for us overall, leading both practice and qualifying highlighted how good our short-run and new tyre pace was. Both Nicholas and I struggled with the start for the Feature Race and I was lucky to get away, dropping me back slightly. I climbed back up to second but had to settle for fifth. Today, I lost some ground starting from the wet side of the grid, but got back into second where I had to manage the tyres and the gap behind me, so I opted to secure second.”

Nicholas Latifi:“I’m quite disappointed after the opportunities we had. I picked up all the necessary references for qualifying in practice and that showed earning sixth on the grid for the Feature Race. Unfortunately I had a clutch problem that ruined the rest of the weekend. It was a shame, as once I got going my pace was among the best in the field. Starting at the back in the Sprint Race was always going to be tricky. We salvaged a point, but ultimately missed a chance for many more.”

François Sicard, Managing Director:“Overall it’s been a satisfying weekend, where we’ve outlined we’re one of the teams to beat, but we need to convert our qualifying pace into more points. Nicholas’ first race was compromised early while we gambled on strategy with Alex, but it didn’t pay off. Our performance today was more representative, however if we want to challenge for the titles we need to deliver these kind of results every weekend. Next up is Monaco, a race we won last season, and our aim is to retain the trophy.”