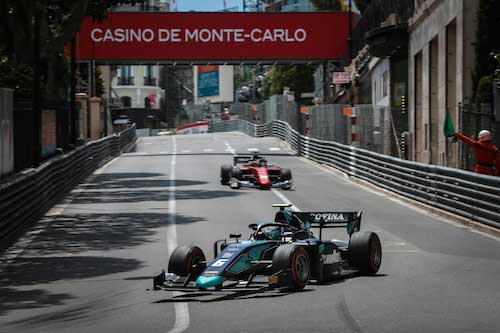 Pole Position and two points finishes for DAMS in Monaco

DAMS driver Nicholas Latifi earned a double-points finish in round four of the FIA Formula 2 season at Monte Carlo, as Alexander Albon suffered from misfortune after taking his third pole position in a row.

After starting Friday’s Feature Race from the back of the grid, Latifi charged his way through to bring home a ninth place finish. In the weekend’s second race, the Canadian was forced to pit early on, but he managed to climb back up to eighth, setting the fastest lap in the process.

Thai-British racer Albon scored his third-consecutive pole position in Thursday’s qualifying, but contact whilst leading race one forced him to retire. Starting from the back of the field on Saturday, Albon battled up to the top-10, before an incident ended his race prematurely.

Alexander Albon:“I struggled with confidence in practice, but I knew we had a quick car. We made some changes for qualifying, which helped us to our third straight pole, showing DAMS’ one lap pace. I made a good start in race one, and managed the lead from there. I then had contact under the safety car, which was really unfortunate. In race two we started from the back and the car was good, but we were unlucky with contact again. Our pace was very strong, so we’ll aim to bounce back next time.”

Nicholas Latifi:“I started the weekend very strongly in practice, which was good for my confidence, but in qualifying I pushed too hard and errors ruined both of my laps. Without the second safety car on Friday we would have benefitted from the reverse grid. In the Sprint Race early contact meant that we gambled on stopping for the super-soft compound tyres, which paid off as I set the fastest lap and earned the final point. It is a little silver lining, but it doesn’t represent the potential we had shown.”

François Sicard, Managing Director:“We had many highs and lows this weekend. We were strong in practice, and Alexander backed this up with another fantastic pole. On Friday, Alex’s race was destroyed by a very unlucky incident, while Nicholas made a great recovery. After contact on the first lap, Nicholas came back well again in the sprint race, while Alex was looking good for points prior to his accident. It’s a disappointing weekend, but we will aim to shine at our home race next at Paul Ricard.”