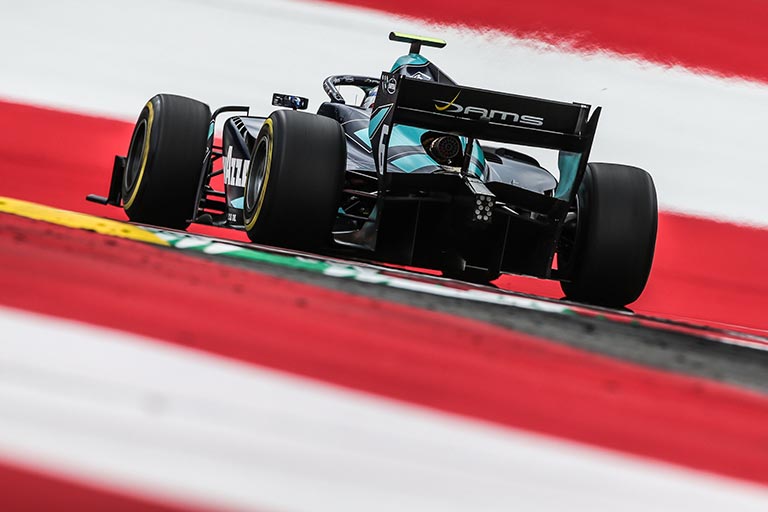 For the second consecutive weekend, DAMS drivers Alexander Albon and Nicholas Latifi scored three points finishes in a challenging sixth round of the 2018 FIA Formula 2 Championship at the Red Bull Ring, Austria.

After qualifying eighth, Albon conserved his tyres well to pick his way through the field and claim another top-five finish in Saturday’s Feature Race. The Thai-British driver showed great ability in the Sprint Race, as he held off Lando Norris to collect another fifth-place finish.

Limited running saw Latifi line-up 19th for the Feature Race, but good composure meant he was able to make up numerous places, just missing out on the points in 11th.  The pace improved for the shorter Sprint Race, as the Canadian slipped through to take home the final point in eighth.

Alexander Albon:“It was a tough weekend for us. We started well in free practice, but moved in the wrong direction with the set-up. Maybe we were too greedy, as we wanted the pole position! It was the first time outside the top-three for us in qualifying. We struggled with certain aspects, which carried over into race one, where we had to manage the tyres a lot. It was good to make up some positions, but we will put work in before Silverstone, which our car is more suited to.”

Nicholas Latifi:“Overall, it was a mixed weekend for us. Unfortunately, the turbo issue in practice meant I wasn’t able to do as much running as I’d have liked, so we went into qualifying blind, not being fully prepared with the car and track. Race one was difficult to manage with tyres and I was unable to challenge for the reverse-grid pole. In the Sprint we struggled with the race pace, but I’m glad to take a point home.”

François Sicard, Managing Director:“It wasn’t a satisfying weekend despite the three points finishes. We struggled to find a good balance and were unable to reach the level of performance we’ve had in previous races. We improved throughout the weekend, but it was a little bit too late. It shows we are heading in the right direction though as we prepare for Silverstone in a few days. We should have a good car there and hopefully we can confirm this with a strong result for Alex and Nicholas.”