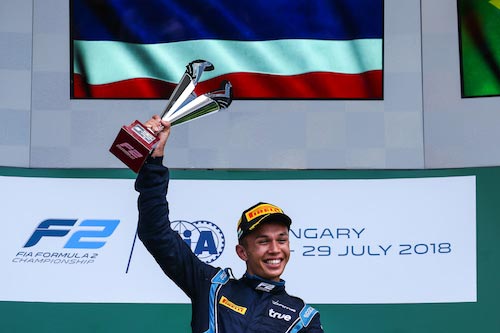 Third victory of the season for DAMS in Hungary

Alexander Albon claimed his and DAMS’ third victory of the 2018 FIA Formula 2 Championship season, after winning in the Sprint Race at the Hungaroring, Hungary.

Despite qualifying 13th, Thai-British driver Albon fought back in Saturday’s Feature event to take fifth. A good getaway in race two saw Albon leap into second, managing his tyres before making a decisive move for the lead at Turn 1 with four laps to go, building a comfortable margin by the finish.

After starting race one 14th, Nicholas Latifi also worked his way into the top-10, only to be forced to retire with a mechanical issue in the final few laps. In Sunday’s Sprint Race, the Canadian climbed from 19th to 13th on the opening lap, before contact forced him to make an unscheduled pitstop.

Alexander Albon:“We started the weekend strongly in practice, but in qualifying we couldn’t make the super-soft tyres work. The goal for the Feature Race was to finish in the top-eight, which we managed after some good fortune with the weather favouring our setup choice. I made a good start in race two, and was able to manage my tyres well, taking the lead in the closing stages. Our issues in qualifying show we still have some work to do, but we’re sure to come back strong after the summer break.”

Nicholas Latifi:“Overall, I’m quite disappointed with how the weekend unfolded. We were missing something in qualifying, which was evident for both Alex and I. Race one was a bit chaotic with the mixed conditions, but we made progress before the alternator problem. I had a good start from the back in the second race, but I had contact when another competitor slowed suddenly ahead of me, forcing me to pit. I’m looking forward to the break, we’ll do some work and be closer next time out.”

François Sicard, Managing Director:“The weekend ended quite well with Alex’s second magnificent victory in a row, putting us back on course in the championship ahead of the break. Qualifying did not go the way we wanted, which was the team’s responsibility. Alex made a fantastic charge in race one, and then followed it up with another brilliant drive to win on Sunday. Nicholas suffered from bad luck in both races, and his results are not representative of the performance level he showed.”