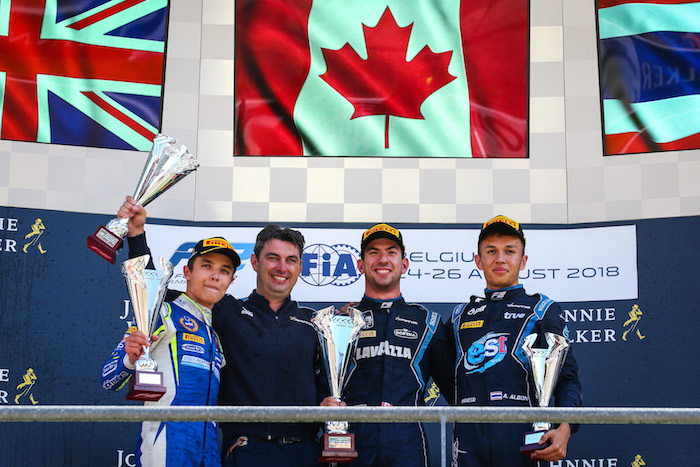 Latifi takes DAMS’ fourth victory of the season at Spa

Nicholas Latifi claimed his first and DAMS’ fourth victory of the 2018 FIA Formula 2 season, with Alexander Albon adding another podium to his tally at Spa-Francorchamps, Belgium.

After qualifying in 12th position, Latifi made a post-pit-stop charge in Saturday’s Feature Race to claim eighth-place, and pole position for the Sprint Race. The Canadian maintained his lead into La Source on the opening lap, going on to take a comfortable lights-to-flag victory, his first of 2018.

Thai-British racer Albon qualified sixth for the weekend’s first race, before battling to take a strong fifth in Saturday’s race. Starting Sunday’s Sprint event from fourth, Albon dropped back initially, before charging through to third in the latter stages, following excellent tyre management.

Nicholas Latifi:“After being out of position in qualifying, we made up the positions to earn reverse-grid pole for Sunday, which was one of our targets. The start of the Sprint Race was crucial, but I held on to the lead. From there I could feel the car was really good and I was able to build a comfortable margin by the end. I’ve been through a tough period recently, but I hope with this win we can now continue this momentum, and I have to thank the team for their constant support.”

Alexander Albon:“In practice and qualifying, I couldn’t find the lap-time and we deserved to be higher than sixth. I struggled on the soft compound tyres in race one, but when we changed to the harder compounds the car came alive and we made up lost ground. In the Sprint Race I didn’t feel I had the grip, but I managed the tyres and it paid off in the end. It was a great weekend for DAMS, we made good progress with our race pace and if we can re-find our qualifying form, we’ll be right up there.”

François Sicard, Managing Director:“We are very satisfied with the results DAMS obtained at Spa, with a great Sprint Race double-podium and Nicholas’ first win of the season. After not being where we expected in practice and qualifying, both drivers recovered well in race one. With good starting positions for the second race, we made sure to capitalise, earning two excellent results. We are in contention for both the Drivers’ and Teams’ Championships, so we’ll be looking to score more big results at Monza next weekend.”

The 10th round of the FIA Formula 2 Championship will take place at Monza, Italy (31 August – 2 September).