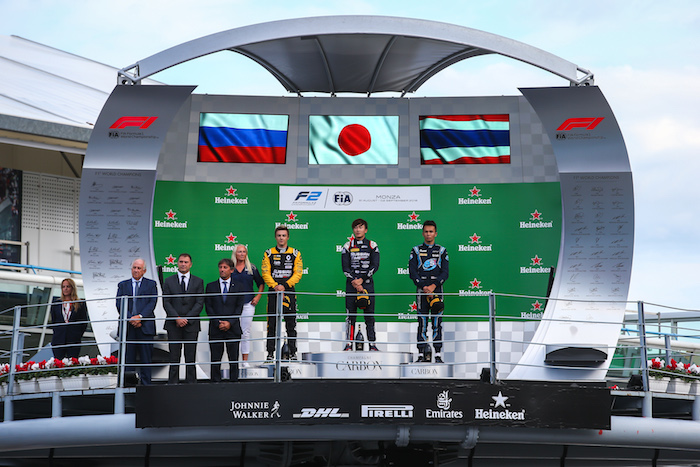 DAMS driver Alexander Albon earned another podium finish, with Nicholas Latifi adding a pair of points-paying finishes in the 10th round of the FIA Formula 2 Championship at Monza, Italy.

After qualifying third, Thai-British racer Alexander Albon battled hard to earn his sixth podium-finish of the season in Saturday’s Feature Race. Starting the Sprint event from sixth, Albon made up ground in the early stages, before being forced to retire with a mechanical issue.


Nicholas Latifi set the fifth-fastest time in qualifying, before going on to take a fifth-place finish in the weekend’s first race. The Canadian driver made a fantastic start in Sunday’s Sprint Race to jump from fourth to the lead, fighting valiantly, but ultimately finishing just off the podium.

Alexander Albon:“We started well with third in practice and qualifying, showing we were very competitive. In race one we were unlucky with the pit-stop, but the car was excellent and we could fight back well and third was a good result. I made a great start in race two, and felt good about our position, but we had a technical problem which kept getting worse, causing us to retire. We made some big gains this weekend, but it was frustrating to have a non-finish when battling for the championship.”

Nicholas Latifi:“We didn’t get off to the best of starts in practice, but we sorted everything for qualifying and I put in my best performance of the season so far. Race one was a good result, I think we lost out slightly on the strategy, but my pace matched the cars ahead of me throughout. I made a really good start in race two to take the lead, but we were lacking some pace as I couldn’t pull away and fourth was the best I could do. We got some good points, but I was hoping to come away with a bit more.”

François Sicard, Managing Director:“Having both cars in the top-five in qualifying showed that we maintained our form from Spa. Race one went very well for the team, with third and fifth, beating our championship rivals. Nicholas took a strong fourth in race two, adding to a solid weekend, while Alex was forced to retire, which is not a good result for our championship aspirations. The performance of the entire team and both drivers has been excellent this weekend, and now we need to work towards the final two races.”

The 11th round of the FIA Formula 2 Championship will take place at Sochi, Russia (28-30 September).