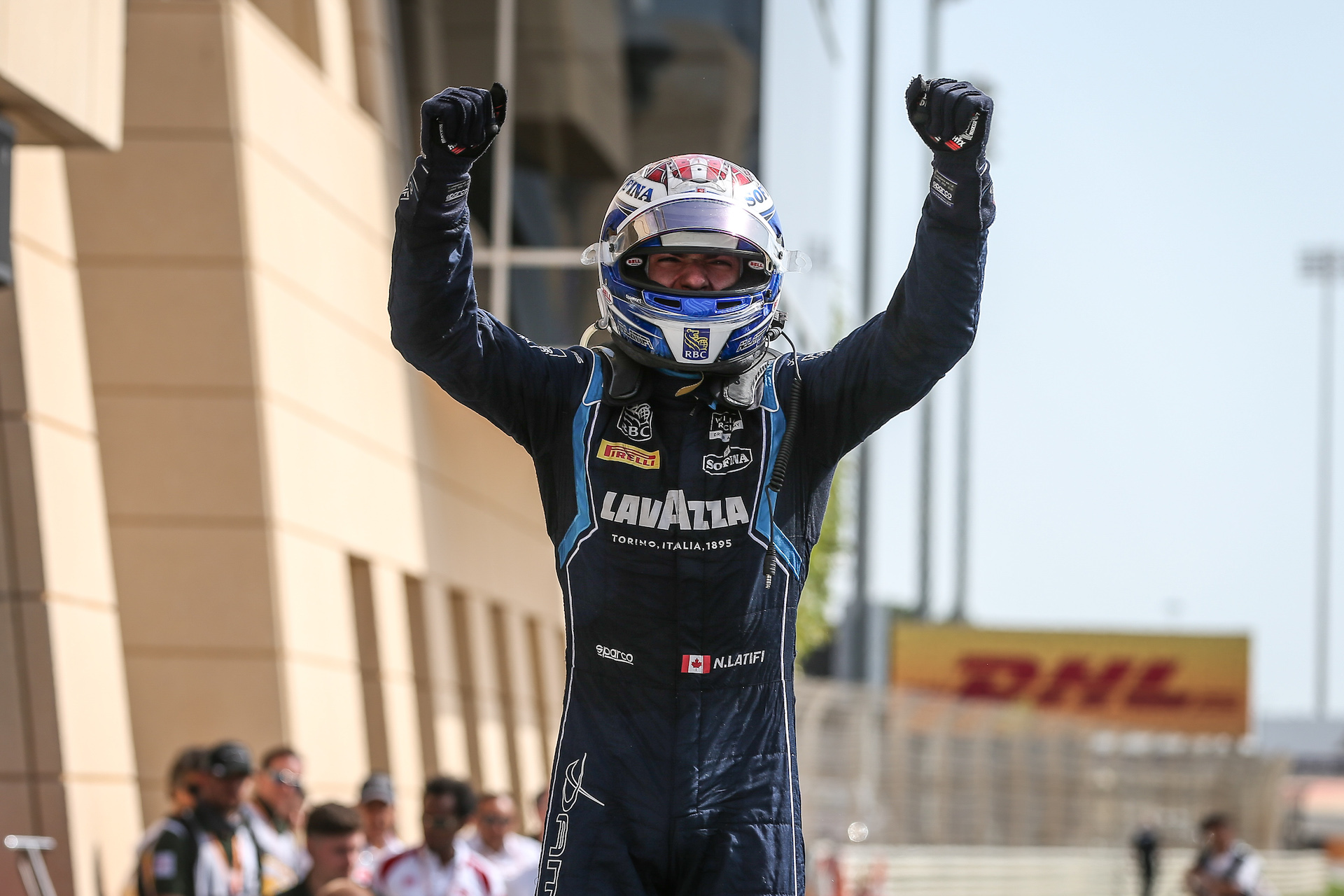 DAMS enjoyed an incredible start to the 2019 FIA Formula 2 Championship in Bahrain, winning the Feature Race with Nicholas Latifi, as he and team-mate Sergio Sette Camara scored podium finishes in both races.

Starting from fourth on the grid for the Feature Race, Latifi’s super opening lap brought him up to second. On lap 9 of 32 he passed the leader under braking at the Turn 1 hairpin, and built a three-second advantage.
Following an extended first stint, the Canadian made his mandatory pit stop on lap 16, switching from the harder prime to the quicker option tyre three laps later than his chasing rivals. Although a wheel gun issue initially brought him down to fourth, Latifi utilised this strategy to bring himself back into contention.
The Williams Formula 1 reserve driver went on a charge, taking three places in as many laps to regain the lead. He rebuilt his advantage and extended it, crossing the finish line an almighty eight seconds ahead of his nearest competitor.
A hectic start to the Feature Race dropped Sette Camara from eighth on the grid to 13th, the McLaren F1 junior got his head down and made up positions, reaching the podium places with five laps to go, finishing third.
In the reverse grid Sprint Race, Sette Camara and Latifi drove a clean first lap to rise from their respective sixth and eighth place grid spots to be second and third.
Amid differing strategies in which some teams elected to take a tyre change, the drivers held on to a double podium finish, crossing the line second and third giving DAMS the lead in the teams’ championship.

Nicholas Latifi: “Overall it was a really strong weekend and a great start to the championship. I’m really happy to get my first Feature Race win and it being the season opener, it just gives you a lot of confidence. In the Sprint Race I kept my nose clean and found myself in a podium position right away. I’m glad to reward the team for all the long hours they did over the winter. To get two cars on the podium in both races is a testament to all the work they are doing.”
Sergio Sette Camara: “Great weekend in Bahrain. We showed that we are quick in all conditions and this is extremely important, even more so is the strength we showed as a team. Nicholas did a great job to make less mistakes, I made a few more that cost me a little bit but still the car was there, and we had the pace to get back up there and score big points. We did a very good job in winter testing, now we need to keep the focus, maintain this quality and we will do well for sure.”
François Sicard, Team Manager: “A very positive weekend with two cars on the podium in both races, and the icing on the cake is a brilliant win for Nicholas. The weekend was nearly perfect, you can always improve but it would have been difficult to have hoped for more. We leave Bahrain with drivers second and third in the championship and the team on top of the standings, which is great. We know this is only the first of 12 rounds and we are now going to focus on Baku and hope to continue on the same dynamic.”

The second round of the 2019 FIA Formula 2 Championship will take place in Baku, Azerbaijan on April 26-28.
Photo: Dutch Photo Agency