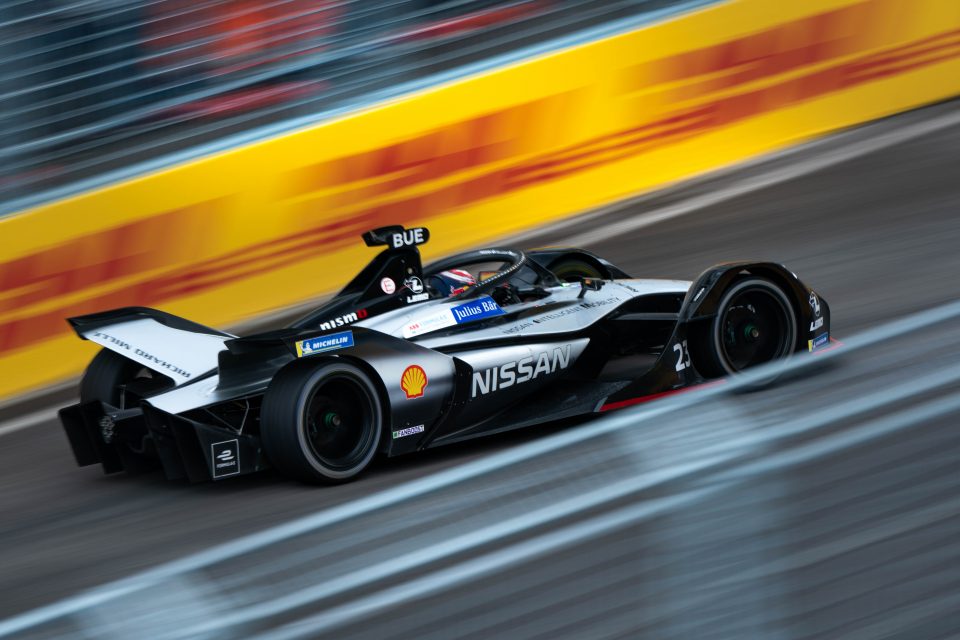 Nissan e.dams has begun the European leg of the all-electric ABB FIA Formula E street racing championship in Italy with a strong points haul in Rome for Sebastien Buemi and Oliver Rowland.

Swiss racer Buemi crossed the finish line in fifth place with Rowland just behind in sixth as the team scored points with both drivers for the second race in a row. Nissan e.dams is also one of only two teams to have both cars finish in the top ten in Rome.
Despite some misfortune in qualifying, Nissan e.dams remains the only team to have scored two pole positions in the highly competitive season five of Formula E – in fact, Nissan was one of only four teams in championship’s history to have both of its drivers start on pole in a single season.
Rowland’s second shot at scoring pole this season was ruined by a tap with the wall during his qualifying run. The damage hindered his pace, forcing him to start the race from 10th on the grid.
Buemi made it through to Super Pole qualifying again, but a brief rain shower just as his car hit the track ruined his run. All his Super Pole rivals were able to enjoy a drying track which resulted in faster times.
In the race, both Nissan e.dams’ drivers made great starts – Buemi jumped from sixth to fourth and Rowland from 10th to sixth.
A red flag delayed their progress after the opening lap, but once the race went green, both drivers showed good pace but were unable to move through the pack.
For the third time this season, both drivers finished in the points at the checkered flag.
Remarkably, season five of the Formula E championship has had seven different race winners from different manufacturers in seven races.
The upcoming Paris event on April 27 will be followed by races in Monte Carlo, Berlin and Bern before heading to the USA for the final double-header weekend in New York.

Sebastien Buemi: “We wanted a bit more today, but fifth and sixth was good for our championship points. Somehow, we weren’t quite as competitive as the previous race in China. The positive I’m taking out of today was I made it through to Super Pole again and finished P5 – it could definitely be worse. I was unlucky with the rain in Super Pole, but that’s how it goes sometimes. When we get to Paris, it would be great to make it eight for eight and join the race winners, but I just have to concentrate and do my job. I think we have a very good package and we just have to keep fighting. I think our car will be better suited to Paris. Rome has a lot of high-speed corners whereas Paris is narrow and short and similar in some ways to Sanya.”
Oliver Rowland: “I was fastest in the opening practice session, and fourth in the second session so qualifying was a little disappointing. I tagged the wall out of turn two, and the car was damaged. Luckily, I was able to squeeze out a lap which put me P10 for the race. I made a good start and was up to sixth early. I was fortunate that I didn’t have a lot of pressure from behind, so that was nice. I was able to try a few things during the race and work on energy management which left me with the most available power for the finish. I’m looking forward to racing in Paris. I visited the race two years ago when I was racing with DAMS so now it’s back to the simulator to learn as much as I can and then go out to challenge strongly in round eight.”
Jean-Paul Driot, Team Principal: “We knew this championship was going to be insanely competitive with the new “Gen2” car, but this season has been quite remarkable. We’ve shown we have race-winning pace this year and now we have to complete the job. Both Sebastien and Oliver had good clean races today and kept out of trouble – we’ll be working hard to get them to the front of the grid for Paris where they will be able to fight for the win.”
Michael Carcamo, Nissan Global Motorsport Director: “Today was a solid points day, but we’ll go away and continue to do our homework to try to improve our pace. We were a bit unfortunate in qualifying, and that probably made the difference today between solid points and podiums. The Nissan e.dams team would love to continue the race win streak for Formula E and make it eight for eight at the next race in Paris.”