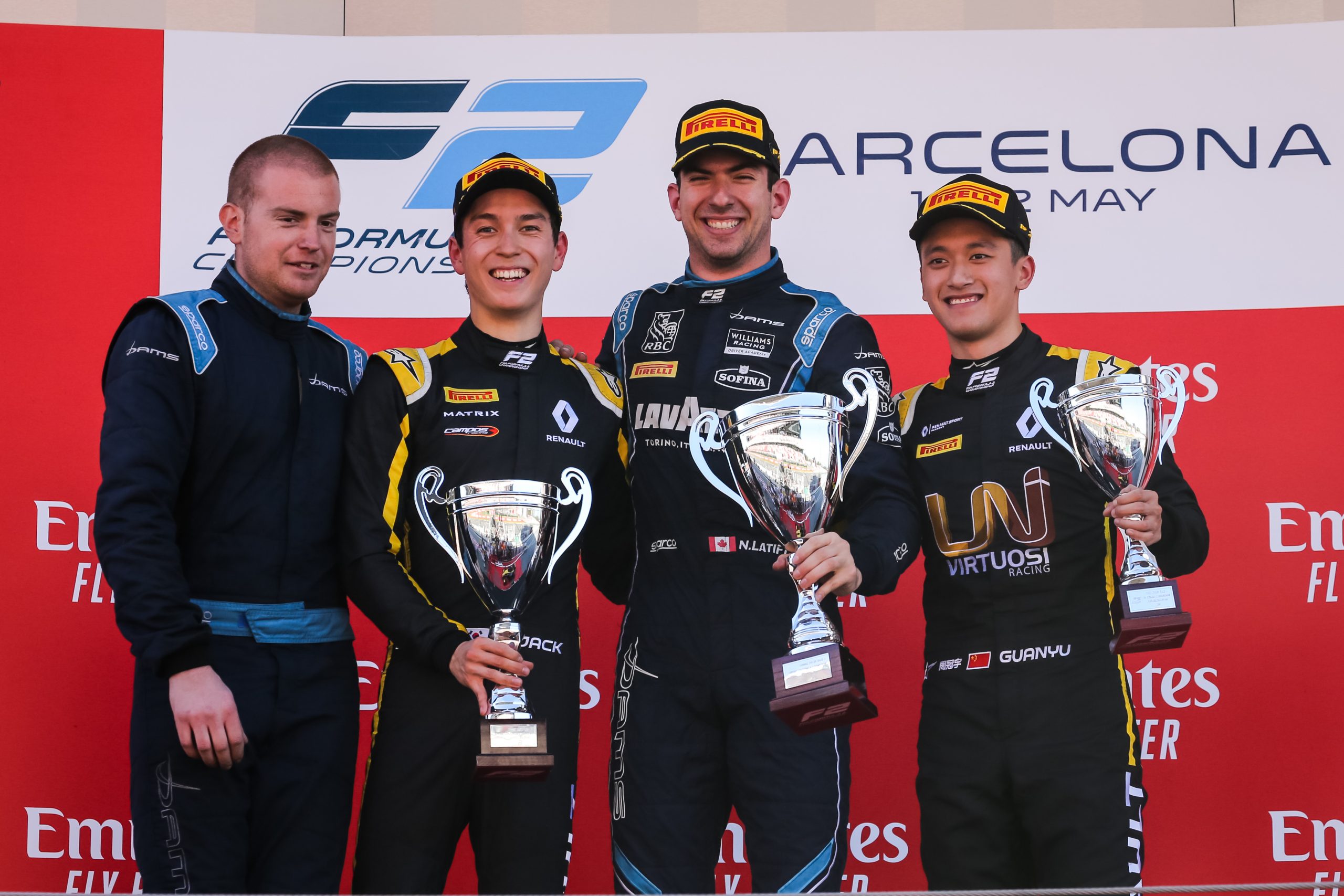 DAMS kicked off the European leg of the 2019 FIA Formula 2 Championship season with victory in the Feature Race with Nicholas Latifi, who extended his drivers’ championship lead.

Following a strong practice session, the Williams Formula 1 reserve driver battled for pole but was pipped at the post for the best time and would line up on the front row of the grid in second.

After maintaining position off the line, Latifi settled into a rhythm for a race in which tyre management was critical until, on lap 31 of 37, the Canadian swept around the outside of Turn 1 to take the lead and secure his third win in five races.

From eighth on the grid in the semi-reverse grid Sprint Race, he was able to improve to sixth and score the fastest lap along the way for two bonus points. That means he leaves Circuit de Barcelona-Catalunya with an extended drivers’ championship advantage of 26 points, with DAMS leading the teams’ standings by 25 points.

After a competitive qualifying in sixth, Sergio Sette Camara was unfortunate in the Feature Race as an electrical issue during his pit stop cost him several laps in the garage. Although he re-joined the race he was not classified in the results, leaving him 18th on the grid for the Sprint Race. Due to the high-speed nature of the circuit, overtaking opportunities were limited and the McLaren Formula 1 test and reserve driver could only finish 17th.

Nicholas Latifi: “The weekend started off with a good practice in second, so we were on the right foot going into qualifying. I almost had pole, but we had some brake problems during the fast lap so I think there was potential for more. Nonetheless, I was happy to start from the front row. The Feature Race was about being patient, waiting for the race to come to me once I settled into second. It was a very long stint on the prime tyre, 32 laps waiting until I picked my opportunity to get my third win of the season. It’s always a bit difficult to overtake in Race two here, especially with the DRS train so I had to sit behind some slower cars and just pick my moments to pass. I didn’t move forward as much as I’d like but we got the fastest lap which is quite important as well, so I’m happy with the pace and the points.”

Sergio Sette Camara: “It was a very disappointing weekend. Once we had the issue in the Feature Race we knew the Sprint Race would be really difficult, especially here where it’s so hard to overtake but my team did an amazing job to get the car fixed and I’m really thankful to them. I’ve been very unlucky lately but I know the team is fully behind me and we’re going to be working hard to ensure we can fulfil our potential, which is to be fighting at the front of the field for podiums and wins. Hopefully that means we can start afresh in Monaco.”

François Sicard, Managing Director: “It’s been a great weekend for DAMS and Nicholas who is consolidating his championship lead. It was very satisfying for him with two strong races, especially the Feature Race where he proved that he was the boss. Unfortunately, we also have had great frustration as we have two drivers capable of challenging for the title and Sergio had another tough weekend. There was a technical problem on the car for which we worked all night to find a solution. This issue ruined any hope of a strong Feature Race for Sergio and also jeopardised his Sprint Race. Nevertheless, we are very happy with Nicholas’ achievements and we are now focusing on the next race in Monaco. It’s a circuit where driver talent is paramount and with Sergio and Nicholas we should be able to obtain another strong result. Both drivers will take part in the Formula 1 test this week and will then head to our workshop in Le Mans to start preparations for Monaco, where we aim to help and support Sergio to come back at the front.”

The fourth round of the 2019 FIA Formula 2 Championship will take place in Monte Carlo, Monaco on May 23-25.