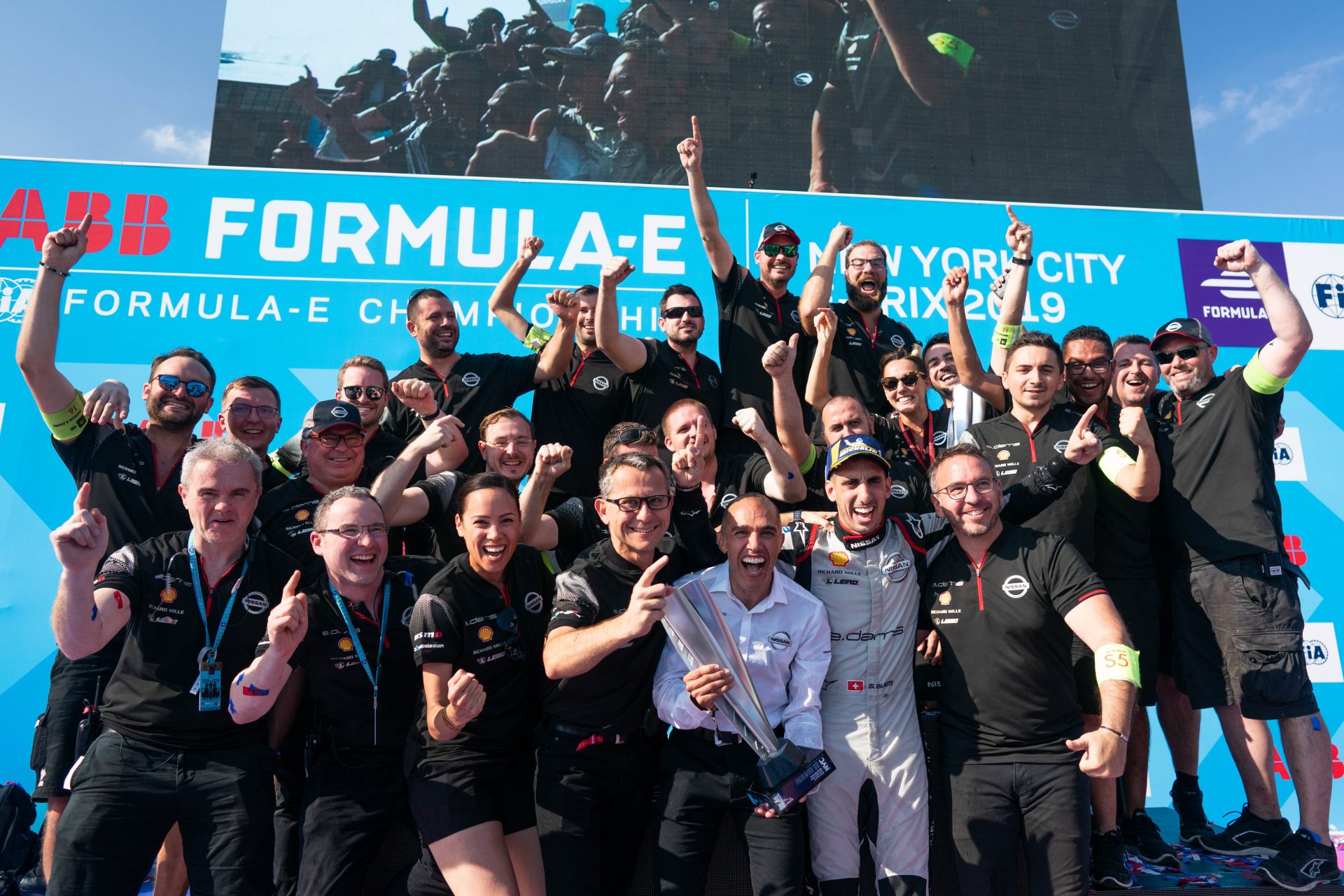 The victory was another key milestone for the team, which earlier today broke the record for the most pole positions by a single team in a Formula E season (six) and extended its record for the number of super pole appearances by one team in a season to 15.
Buemi was fastest in his qualifying group, stunning the opposition in super pole to earn the top spot by 0.412 seconds and then lead every lap of the race to take the win in the penultimate round of the 2018/19 ABB FIA Formula E championship.
Not even a late safety car period could deter Buemi’s charge to the checkered flag.
The result marks a fourth podium in succession for Nissan e.dams and the third in a row for Buemi, who finished second in Berlin and third in Bern in the past two rounds.
Buemi now has 13 Formula E victories and 15 pole positions – both records for the championship. Remarkably, Nissan e.dams becomes the ninth different team to win in Formula E this season.
Nissan e.dams has risen to third in the teams’ championship and Buemi is now fourth in the drivers’ standings with one race remaining tomorrow. The Swiss driver is mathematically still in contention for the title but would need to earn the pole, take the win and hope the three rivals ahead of him fail to score in Sunday’s final round.
The final round of the fifth Formula E championship season will be raced tomorrow on the Brooklyn Street Circuit.

Sebastien Buemi: “I’m quite emotional because it has been more than two years between victories. I really wanted to win today for Nissan e.dams team principal Jean-Paul Driot, who hasn’t been doing well lately with health issues and this win is for him. The safety car actually helped me in the end. Early in the race, my crew told me we were doing well on energy management compared to the guys behind me. In the end, it was similar to Rome – I had to slow down a little to cross the line after the 45-minute mark, so we didn’t have to do an extra lap. We’re actually in contention for the championship, but qualifying will be difficult because we will be in group one. That won’t be easy, but the track will be the same, the conditions will be the same – we’ll give it our best shot and see what happens. A big thank you must go to my guys on the Nissan e.dams team – we’ve been so close, so often earlier this year and I’m really pleased for them.”
Oliver Rowland: “I made a mistake on my qualifying lap, and that really cost me in the end. I started making good progress, and my race pace was strong. I was coming through the pack and made it up to 11th but Edoardo Mortara came across my nose and put me into the wall, and we had some damage. I could have ended up sixth or seventh if it wasn’t for that. I know my car is quick because I was fastest in practice two, and now we have another chance to do it again tomorrow. Seb did a brilliant job today, and I’m really pleased for the team – hopefully, it is my turn tomorrow.”
Michael Carcamo, Nissan Global Motorsport Director: “We’ve had pole positions, we’ve had podiums but to finally get the win and have Nissan on the top step of the podium is something I don’t think I’ll forget for the rest of my life. The team has put in the work, and they really deserve this. Everyone at Nissan, e.dams and NISMO have put in such an amazing effort and we’re thrilled. We all want to dedicate this win to Nissan e.dams team principal Jean-Paul Driot, who has been suffering some health issues this year. We would have loved to have him here with us this weekend, but I’m sure he is thrilled with the result.”