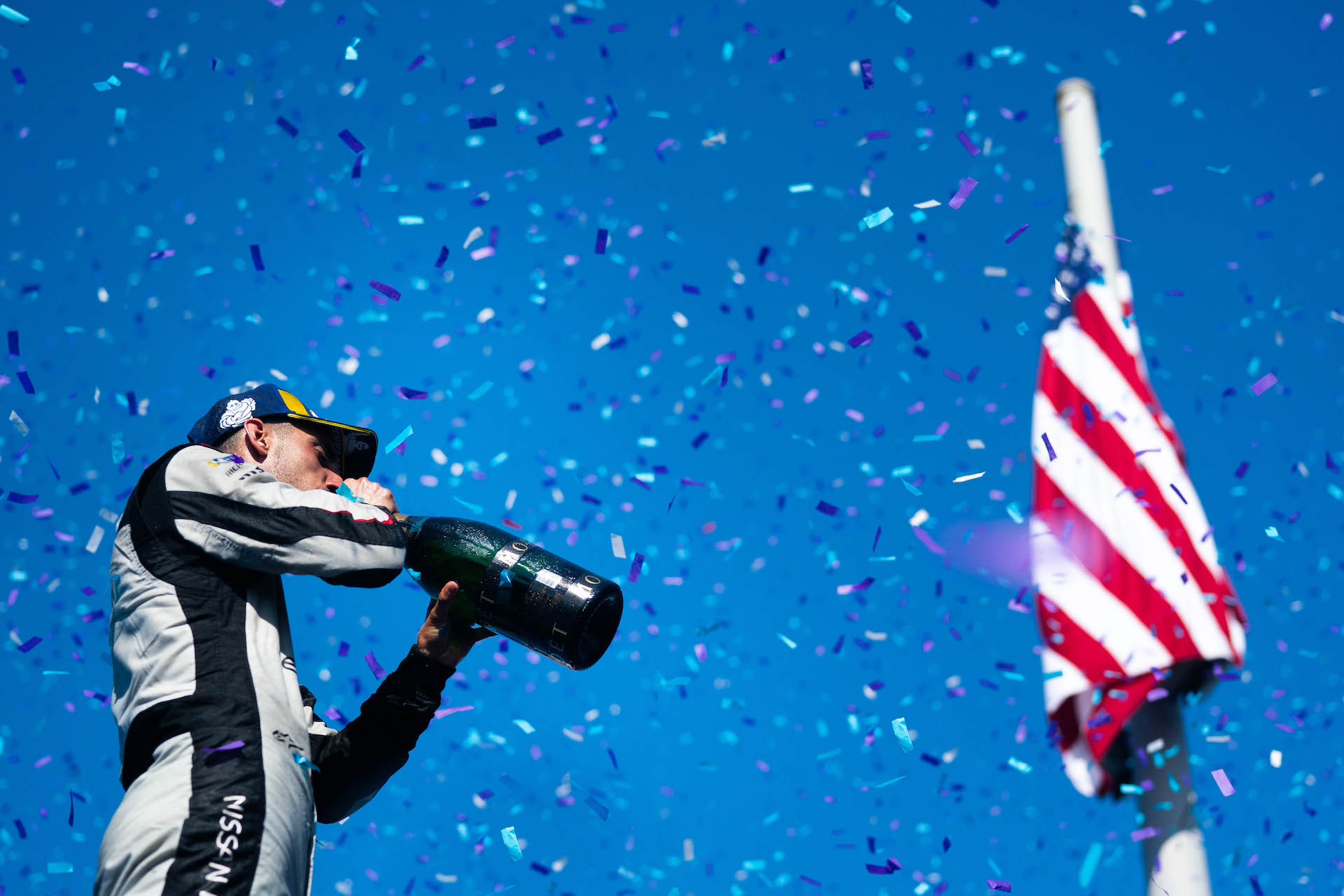 Nissan e.dams continued its impressive run of podium results with a third-place finish today for Sebastien Buemi – a result which elevated him to second in the ABB FIA Formula E driver’s championship standings.

The podium finish marked Nissan’s fifth in succession and fourth in a row for Buemi. After finishing second in Germany, third in Switzerland, and now winning and taking third in the New York double-header, Buemi became the first Formula E driver this season to score four consecutive individual podiums.
Buemi has enjoyed an incredible run after suffering a puncture while leading the Paris E-Prix in round eight. After leaving that event 13th in the points standings, he scored 89 points in five races to climb to the runner-up position.
Combined with team-mate Oliver Rowland, Nissan e.dams scored 34 more points than any of its rivals in the final five rounds.
Rowland also impressed today with a fighting run to sixth place, which elevated him to 10th in the driver’s standings. The result cemented his position as the series’ best performing rookie in season five.
The first Japanese manufacturer to enter Formula E, Nissan enjoyed a remarkable debut year which included a maiden victory, seven podium finishes, a series-leading six pole positions, a fourth-place finish in the team’s championship and continued its impressive run of qualifying for the top six super pole session in every race.
In today’s event, Buemi qualified third fastest and jumped to second at the start. He lost second mid-race to eventual race winner Robin Frijns, but fought strongly to cross the line in third.
Rowland only just missed the super pole session by qualifying seventh. He twice used the Attack Mode power boost early in the race defensively but fell back a couple of positions before regaining places at the end with a clean and decisive drive to sixth place.

Sebastien Buemi: “If somebody would have told me after the Paris that I would have finished second in the championship I wouldn’t have believed them. I’m really happy to grab four podiums in a row and finish runner-up in the points. I told Robin Frijns in the press conference that if he hadn’t touched me and punctured my tire while I was leading that race in Paris I could have won the championship. It is motorsport, and those things happen. I’m a little bit sad for Nissan e.dams that we missed out on finishing third in the team’s championship by only a single point. But for the first season for Nissan, we had wins, podiums, pole positions – we have to be proud of that.”
Oliver Rowland: “My race was pretty good. I started seventh and quickly got up to fifth. I probably used my attack modes a bit too early, and I was a bit of a sitting duck later. I lost a couple of positions but kept pushing to the end to cross the line in sixth. You are always looking for more but looking back at the season it has been really positive. I’ve had three pole positions, took Nissan’s first podium, scored a podium in Monaco – I just have to work on a bit of consistency. I have to say a big thanks to Seb for all his advice – he has been a huge help as my team-mate and of course a big thanks to all the guys at Nissan e.dams who have worked so hard throughout the year.”
Jean-Paul Driot, Team Principal: “I want to thank everyone in the team for the incredible amount of hard work and also thank our drivers for their efforts and congratulate everyone on these results. Taking Nissan to victory lane was certainly a highlight and something we’d love to continue to do again next season. We know we can’t rest on our laurels because the competition is about to get even tougher, but we are looking forward to the battle.”
Michael Carcamo, Nissan Global Motorsport Director: “We knew we faced a steep mountain to climb when we entered this championship and the first half of the season certainly tested us, but I could not be more proud of everyone at Nissan, e.dams, and NISMO for the way they kept fighting. We certainly achieved some incredible milestones and taking our first win yesterday was undoubtedly one of them. Our performance in qualifying remained impressive throughout the season but race by race, lap by lap we improved our race performance too. We also now have a full season of data, experience, and knowledge in the Formula E championship which will not only allow us to build a better race package for season six but will also play a key role in improving our electric vehicles for the road.”