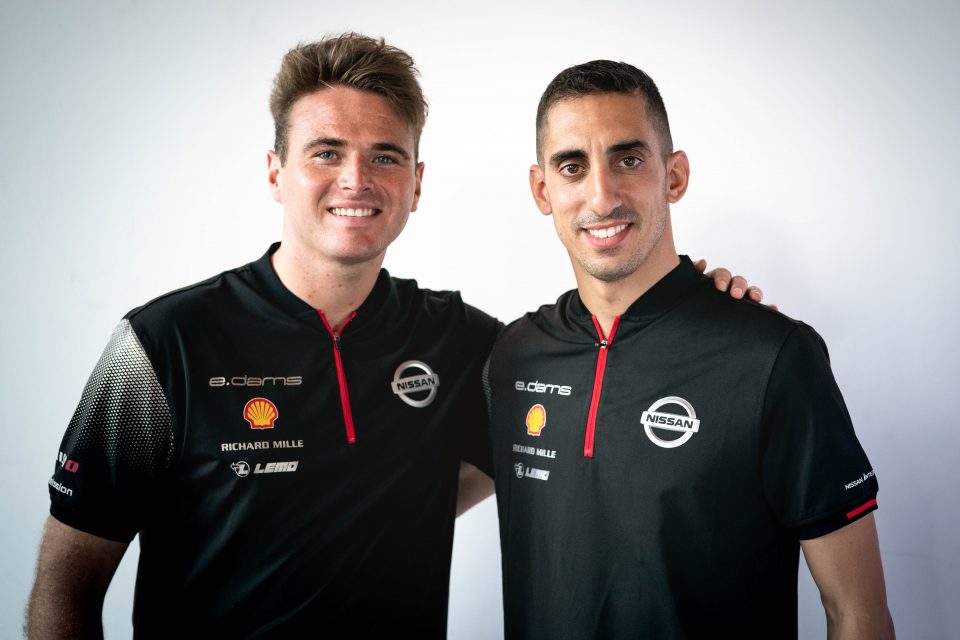 Nissan e.dams drivers Sebastien Buemi and Oliver Rowland will return for the next season of the Formula E electric street racing series after a record-setting debut run.

The duo will continue to demonstrate the power and performance of Nissan’s zero-emission electric vehicle technology during season six of the ABB FIA Formula E Championship. The season kicks off with a double-header in Riyadh, Saudi Arabia on November 22-23. It will continue through major cities including Santiago, Mexico City, Hong Kong, Rome, Paris, Seoul, Berlin and New York before concluding with another double-header in London on July 25-26 next year.
Buemi and Rowland set a series qualifying record with six pole positions in 13 races during season five, as Nissan joined the championship to showcase its Nissan Intelligent Mobility technologies. Buemi went on a late-season charge with four consecutive podiums and placed second in the driver’s championship. Rowland scored more points than any other rookie.
Nissan e.dams qualified for every Super Pole session and set a record of 16 Super Pole appearances between Buemi and Rowland. The two drivers topped the timesheets in 17 practice or qualifying sessions combined – the best performance by any team.
Buemi earned the team’s first victory in season five’s penultimate round in New York. He maintained his record as the most successful driver in Formula E history with 13 wins, 14 pole positions and seven fastest laps.
Rowland topped the timesheets in 10 practice and qualifying sessions throughout the season and earned Nissan’s first podium in Sanya, China.
Nissan became the first Japanese manufacturer to enter Formula E last season, partnering with championship-winning race team e.dams. Nissan is using the series to share the excitement of its zero-emission technology with racing fans worldwide, and as a testbed for future technologies for consumers.

Sebastien Buemi: “We had good pace in season five, and I hope to build on that momentum. There are some new manufacturers joining in season six, but we have much more experience now as a team, and that’s going to make us more competitive. Having Oliver return as my team-mate will be great. Continuity is important; we already have a year of experience working together, so that will be a huge help. Oliver was very strong last year. I want to beat him, but we need both drivers to be fast to help drive the team forward. Having a fast team-mate makes me a better driver.”
Oliver Rowland: “I had a great first season, but now it’s time to prepare properly for my second year and come back even stronger. I came into season five with very little experience, but I think I adapted quite well. I felt very comfortable on the team, and I had a lot of support from everyone. My first season with Seb was terrific. I learned a lot from him. I hope we can both push each other and the team more. I’ll also have a lot more time to prepare and work with the team to understand how to get the car even more to my liking. I think it’ll make a big difference. I want to be even more competitive this season and start winning races.”
Michael Carcamo, Nissan global motorsports director: “Sebastien’s run to second place in season five, and his attitude as a team player, made him an easy choice for our season six line-up. Oliver proved to be a very fast learner, and we quickly got used to seeing his name at the top of the timesheets. There’s no doubt we have an outstanding driver combination. Sebastien went out of his way to help Oliver in his rookie year. For him, it was all about driving the team forward, even on days when Oliver was faster. Having Seb bring home our first victory is a moment everyone at Nissan will remember for a long time.”