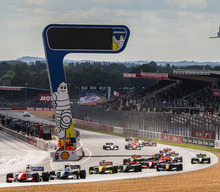 Another solid weekend for DAMS

McLaren’s Dutch protégé was incisive and opportunistic on Saturday and Sunday and his reward was a second and a third place at the Nürburgring. Thanks to these results he is now in third place in the drivers’ championship and consolidated DAMS’ place in the teams’ ratings. His team-mate, Dean Stoneman, was unlucky again in Germany, but he still scored sixth place on Sunday, and isn’t too far behind his team-mate in the overall drivers’ classification.

Qualifying 1: P4 for De Vries (2nd time but 2-place penalty), P8 for Stoneman. Several yellows and a red flag at the end which deprived Stoneman of a place on the second row.

Race 1: De Vries made a blinding start and got up into second place in the first corner where he stayed. After the deployment of the safety car he held on to the leader Oliver Rowland till the end scoring a brilliant second place only 1.2sec behind the Englishman. On the other hand, Stoneman’s Silverstone nightmare repeated itself. The front wing of one of his rivals sliced his left-hand rear tyre and he had to pit on the first lap.

Race 2: The track was drying out at the start so there was a different tyre choice: De Vries on wet weather rubber and Stoneman on slicks like Rowland on pole. The Dutchman made his obligatory stop very early and put on slicks. The safety car came out soon afterwards and gave him an opportunity to finish on the podium, which he seized with both hands despite the return of the rain in the last two laps. Stoneman was harpooned by another car on lap 2 and spun dropping down the classification. Thanks to his searing pace on slicks he had fought his way back up to fourth when the safety car was deployed. He was obliged to make a late pit stop. Despite this he made another stunning fight back from 12th to seventh place, which became sixth when Fantin was penalised.

Nyck De Vries: “I’m really happy to dedicate these two podiums to the team who did a fantastic job. We were very quick on Saturday as I was able to show with an aggressive start. I don’t really know how I managed to finish on the podium on Sunday! I didn’t have the right tyres at the start: the way the race unfolded obviously helped me. I was a bit lucky but I didn’t make any mistakes in the rain and that’s what counted.”

Dean Stoneman: “My bad luck followed me here from Silverstone! It’s a great pity as the car was very well balanced right from the start of the first free session. Let’s forget the first race as there was nothing I could do about the collision. In the second I was able to show just how quick we were. The safety car ruined my chances of a top-three finish, but in the last three laps the car was absolutely fantastic. Although it was good to score some points we really deserved much better.”

Caroline Grifnée, Team Manager: “We can take away a lot of positives from this weekend in Germany. First of all Nyck’s two podiums, especially the one on Saturday. He showed just how quick he is and he hung onto Rowland like a limpet. The next day he took advantage of the situation in masterly fashion so his overall results were excellent. Unfortunately, Dean was again the victim of bad luck in the first race, and also a bit in the second. However, he demonstrated his outright speed on a circuit he didn’t know. Even though both he and Nyck will be having their first outing on the Le Mans layout, we’re going there with our motivation at an all-time high for our home race!”

The Nürburgring in figures