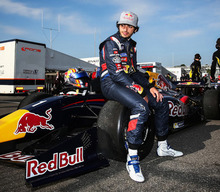 Carlos Sainz Jr and DAMS get the season off to a great start!

This weekend Carlos Sainz Jr, son of the former rally world champion, demonstrated that he has a strong character in addition to his sheer speed. He quickly got over his crushing disappointment in the first heat when he was sidelined by an electronic problem that prevented him from starting from thepole position of the grid. He put on a masterly demonstration on Sunday morning by clinching his second pole of the weekend, which he converted into a dominant victory finishing more than 10 seconds in front of the second-placed driver. Thus, the 2014 season has got off to a great start for DAMS, but with one small hiccup: Norman Nato’s failure to score points despite his fighting spirit.

The DAMS technical team and the Red Bull protégé put the information gathered during the winter tests to good use on the Monza circuit in Lombardy, whose particularity is its very high speed layout. In free practice and qualifying Sainz was at the top of all the time sheets. His fantastic weekend was marred by a connector from the the gearbox’s wiring loom , which went on the blink on Saturday just before the start. Thus, he finished his first race three laps behind the winner. It was a rehearsal for his stunning performance on Sunday. Nato was one of the unwitting victims of Sorensen’s terrifying crash on Saturday as his front bonnet was struck by debris after which he suffered a puncture. The next day he was handicapped by another poor qualifying session and he finished outside the points despite a fighting drive. It was a weekend that fell well short of what he was expecting, but which will help him for the next round.

The championship will continue in two weeks’ time at Motorland Aragon where Kevin Magnussen won the first heat for DAMS in 2013. Carlos likes this circuit on which he set the fastest time during winter testing and where he won in F.R. 2.0 in 2011. It all bodes well for DAMS!

François Sicard, Managing Director: “First of all my heartiest congratulations to the team and to Carlos. He was fantastic all weekend and he showed his strength of character. Blood will out! Carlos confirms this and we can now give him the nickname previously attributed to his father, the Matador! He deserves it. On Sunday he showed everybody who was boss with a drive that was as brilliant as it was intelligent. Norman was unlucky on Saturday, but overall his weekend was a disappointing one. We know he has what it takes to be very quick and I’m sure he’ll soon be back on the right track.”

Carlos Sainz Jr: “I’m really very happy with this first victory of the year. I’d like to thank the whole DAMS team as the car was absolutely perfect all weekend. Saturday’s incident was outside our control and it gave us even more motivation on Sunday. The championship’s still long and we’re up against tough competition so we won’t rest on our laurels. We’re hoping to do even better at Motorland.”

Norman Nato: “It really isn’t an ideal debut. I wasn’t where I should have been in qualifying and I got caught up in the intense mid-field battles. I was lucky on Saturday when bits of bodywork from Sorensen’s car landed on my bonnet; it could have been a lot worse. In the incident a tyre punctured and that ruined my race. I drove very hard on Sunday but starting so far back compromised my chances. I know what points I have to work on, and I’m going to give one hundred per cent to fight my way back to the front-runners in the next race.”

Next round: 26-27 April at Motorland Aragon (Spain)