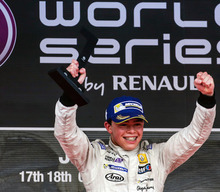 The Sarthe-based team couldn’t have dreamed of a better exit in the final round of the World Series by Renault on Sunday with Nyck De Vries’ masterly drive to his first victory in FR 3.5. The McLaren Junior’s win gave him third place in the drivers’ championship plus the Best Rookie title and helped DAMS clinch second place in the teams’ classification. The only shadow over the weekend was that Dean Stoneman’s jinx struck yet again. Thus DAMS and the FR 3.5 Series part ways, and the French squad leaves the championship with four titles and 16 victories plus many great memories. Good luck to the new series in 2016.