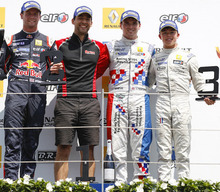 DAMS back on the podium has found its sparkle again!

The Sarthe-based team hit back after its disappointing outing in Hungary last month. In the morning race DAMS scored a double podium finish with Dean Stoneman coming home second and Nyck de Vries third on the undulating track laid out in the magnificent verdant Spielberg setting. Thanks to this result DAMS remains firmly entrenched in third place in the teams’ title chase.

This weekend the F.R. 3.5 Series shared the billing with the ELMS championship so its usual timetable was slightly modified with the two qualifying sessions on Saturday and both races on Sunday. The team used the first free practice session to test aero setups (Dean P13 and Nyck P15). It devoted the second to tyre selection and Stoneman made the right choices as he set the fastest time, while his team-mate struggled and ended the session in 13thplace.

Qualifying on this short circuit was a hotly-contested affair with tiny gaps: the first 15 were covered by under a second in the first session! Stoneman and de Vries did a pretty good job clinching fourth and sixth places respectively on the grid for race 1. In the second session the Dutchman improved and set the fourth-best time which became third on the grid after Mehri’s exclusion. However, under stormy skies with some fat raindrops starting to fall Stoneman had to make do with 12th place after betting on the arrival of a heavy shower that failed to materialise.

In the morning race both drivers made excellent starts and Stoneman and de Vries moved up into second and third places, which they held to the flag despite two safety car deployments. Dean tried to snatch first place from leader Oliver Rowland, but he went a bit wide and had to be content with second spot in front of his team-mate. The French squad met with less success in race 2. Stoneman, who was already up into seventh place, was eliminated in a collision on lap 2. De Vries managed to avoid all the pitfalls and held onto fourth for a long time. In the last third of the race he locked up his wheels and lost a position. He saw the flag in fifth place setting the third-fastest lap in the race last time round. Overall, it was a very positive weekend for DAMS and now it’s time for the team to enjoy the long summer break.

François Sicard, Managing Director: “We’ve got a smile back on our faces and we’ve shown that the Hungarian disappointment was just a blip on the radar. Although the conditions in Austria weren’t easy for rookie drivers Dean and Nyck adapted very well. We were very pleased with our double podium in the morning, the first this season, as it proves that we’ve got the pace. Things didn’t go quite so well in the second heat, but we can now tackle the second part of the season with reinforced confidence and ambitions.”

Nyck de Vries: “I’m very pleased to give the team another top-three finish; it’s great for everybody’s morale. Overall the weekend was positive; we were quick and we turned our speed into points, at least in the first race. It’s a shame we ran into problems in the second but we can now prepare for the rest of the championship in a calmer frame of mind. “

Dean Stoneman: “I’m leaving Austria with mixed feelings. I’m happy to have been on the podium in the first race, which was a great reward for the team’s work. However, I’m disappointed and frustrated about the collision with Latifi at the start of the second race. We tried a gamble in qualifying and I found myself in the mid-field pack with all the risks that implies. It was a racing incident but it prevented me from scoring big points. After the holidays I’m convinced that we’ll come back even stronger than ever.”

Next round: Silverstone (Great Britain, 5-6 September)