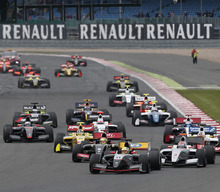 DAMS finishes just outside the top-3 on two occasions

It was a mixed weekend for the DAMS team. Nyck De Vries and Dean Stoneman were the best rookies in the two races. They had a fourth-place finish and a retirement each on Saturday and Sunday, due to collisions. Nonetheless, English driver is now in third place in the drivers’ ratings and DAMS has consolidated its third place in the teams’ classification.

Qualifying 2: P6 for Stoneman (after Yelloly was relegated), P8 for De Vries.

Race 1: Stoneman made a careful start but another driver rear-ended his car causing a puncture. This incident also led to a badly-damaged flat bottom and he didn’t rejoin the race after pitting. De Vries too made a cautious getaway and fought his way up through the field to fourth place at the chequered flag.

Race 2: Stoneman made an excellent start and snatched fourth place on lap 1. His aggressive pit stop strategy was spoilt by a yellow flag and he finally came home less than a second outside a top-3 finish. De Vries was tagged by Ellinas in the first corner, which dropped him back to 15th place. He was fighting his way up through the field when he was involved in another collision, this time with Bonafacio as he was overtaking the latter. The front right suspension was damaged and after making it back to his pit he had to retire. The Stewards decided to give him a 2-place grid penalty at the Nürburgring this coming weekend.

Nyck De Vries: “I enjoyed my first outing on the Silverstone circuit. Even though I had a good preparation session in free practice I didn’t feel fully confident in qualifying. The first race went off okay and I was always in the right place at the right moment so I was satisfied with fourth place. It was the complete opposite on Sunday. I was involved in two collisions and the second one ended my race. It’s a pity, but I’m feeling pretty optimistic for the next round.”

Dean Stoneman: “There was good and bad this weekend. We were competitive in free practice but qualifying didn’t go off as well as we’d hoped, in part because of traffic in the second session. On Saturday I was hit up the rear shortly after the start and the ensuing puncture damaged my car’s flat bottom. Luckily, on Sunday we got everything back in order and after a good start I finished fourth. Without a yellow flag when I had my pit stop I could have scored a top-3 finish. Overall, I’m fairly happy as the car was consistent and well balanced. I’m determined to aim for the podium at the Nürburgring.”

Caroline Grifnée, Team Manager: “In general, we can draw a lot of positives from the weekend. Nyck didn’t know Silverstone at all, and he did a really good job pulling back positions on Saturday despite his lack of experience here so he had to be a bit cautious. Dean was unlucky in the first race, but he showed his fighting spirit the next day by clinching fourth place. If he’d strung together his best sector times in qualifying he would have been on the second row of the grid so he might have scored a top-3 finish. But that’s only putting it off, he’ll do it next weekend!”

Next round: Nürburgring (Germany), 11-13 September.