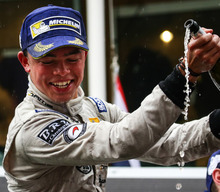 DAMS scored a top-3 finish in each of the heats in the Belgian round of the F.R 3.5 Championship maintaining its average so far this season. In what was almost a repeat of the results at Motorland Aragon, Dean Stoneman finished third on Saturday while Nyck de Vries clinched second on Sunday helping DAMS to hold on to its second place in the teams’ classification.

Finding the right setups on the Spa-Francorchamps roller-coaster is never easy as the DAMS rookies discovered in free practice, which explains the average results of Stoneman and de Vries. Modifications before the qualifying session for race 1 in low downforce trim helped them both to improve and they locked out the third row (Nyck P5 and Dean P6). On Saturday afternoon, the British driver took full advantage of his position making a very aggressive start to snatch third. Stoneman’s skills in nursing his tyres again proved crucial and he saw the flag in third place. On the other hand, his Dutch team-mate lost time when he locked up his wheels under braking and fell back down the time sheets. A very disappointed de Vries saw the flag in ninth place as he wasn’t happy with his performance.

Luckily, the McLaren protégé doesn’t lack resources and temperament. In race 2 in which the aero setup was free he qualified in a brilliant third place. Stoneman failed to adapt quite so well to this setup, but he again nursed his tyres intelligently and finished sixth, which became fifth when Jaafar was excluded. A few seconds before the start a problem with the DRS affected the whole field for the second heat. But it didn’t prevent de Vries from shooting through to take second place in the first corner; a position he held to the flag fighting off the attacks of Vaxivière. Although Stoneman also made a good start he had to make do with fourth even though he drove a great race. So each driver scored a top-3 finish and overall it was a good result for DAMS. The rookies are learning quickly and a victory looks on the cards in the near future.

François Sicard, Managing Director : “We’re leaving Belgium pretty happy with our two podium finishes. Of course, things weren’t perfect, but Nyck’s superb race on Sunday stands out after a first heat below our expectations. It mustn’t be forgotten that he’s a rookie like Dean, who once again showed his speed and his remarkable ability to nurse his tyres. We’re on the cusp of victory and it’s going to come very soon.”

Nyck de Vries : “First of all a big thanks to the whole team as they did a great job all weekend. The first race went off badly. I wasn’t fast enough to score a podium finish; I also made a mistake so ninth place was a big disappointment. Luckily, we had a very good race on Sunday with a great start despite the fact that we couldn’t use the DRS. I had a great scrap with Vaxivière and this time I came out on top!”

Dean Stoneman : “Overall it was a pretty good weekend in terms of points for the championship. We had a few problems with the car’s balance which was tricky to fine tune, but we came out of it pretty well. I’m happy to have added a podium finish on Saturday. Concerning Sunday I think I could have had a place on the first or second row, but a yellow flag in qualifying messed up my flying lap. I’m happy to have clinched the points that went with fourth place; it’s good for me and for the team.”