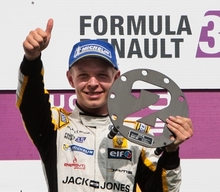 DAMS emphasised the importance of fielding two world-class drivers at the top level of junior single-seater racing last weekend in Budapest (September 12-14) where Norman Nato put his fair share of bad luck behind him to claim a second Formula Renault 3.5 Series victory of the season.With the Le Mans-based squad’s championship leader, Carlos Sainz, finishing fourth and sixth at the Hungaroring, Nato’s perfectly timed win helped him fend off his team-mate’s chief title rival, Roberto Merhi, who is now just 16 points adrift of the Spaniard. Victory for the French outfit also extended their lead in the Teams’ standings to 48.

Any chances of an Indian summer in Hungary were quickly washed away as heavy rain disrupted much of round seven. Nevertheless, Sainz Jr began brightly by topping the timesheets in both free practice sessions, with Nato close behind. However, Saturday’s qualifying session went far less smoothly for Spain’s Red Bull-backed 20-year-old who could manage no better than 14thafter encountering heavy traffic, while Nato surged to third.

But despite starting from the second row, it was Norman’s turn to suffer misfortune in race one when a slow getaway consigned the Frenchman to eventually finishing eighth, while Carlos stormed through to secure fourth and salvage crucial points for his title campaign.

The threat carried by Merhi was even greater during second qualifying when he pipped both DAMS drivers to pole position, with Carlos this time bettering his older team-mate.

However, Nato dismissed all thoughts of another poor launch on Sunday by vaulting straight into the lead at turn one, while on this occasion it was Sainz who suffered start-line issues and was relegated to fifth. Norman proceeded to brilliantly resist race-long pressure from Merhi – which included a firm defence following the Safety Car period – to take victory. Meanwhile, Sainz claimed sixth after an exercise in damage limitation.

The penultimate Formula Renault 3.5 round of 2014 sees teams and drivers travel to former French Grand Prix venue, Paul Ricard. Needless to say, DAMS’s motivation to repeat last season’s double victory on home soil with Kevin Magnussen will be high as they look to consolidate their Teams’ Championship advantage. Nato will also be aiming to continue his race-winning form in familiar surroundings, while Sainz Jr attempts to rebound from an average weekend by his standards and regain control in the title battle.

François Sicard, Managing Director: “Our Hungarian weekend yielded mixed emotions. On the one hand, Norman’s joyous victory demonstrated his true potential. The entire team and I congratulate him on his achievement. We also strengthened our lead in the Teams’ Championship, and hopefully we can carry the momentum into Paul Ricard. However, Carlos’ various issues meant he lost quite a few points in the Drivers’ Championship battle. We’ll certainly need to pull ourselves together in the final two rounds.”

Carlos Sainz : “Firstly, I would like to extend my congratulations to Norman. Personally, everything looked promising after free practice, but my flying lap during Saturday’s qualifying session was ruined by red flag. My race that afternoon was good, although encountering more problems on Sunday was unfortunate. I missed my first lap, the anti-stall system hampered my getaway, causing me to lose ground. Despite choosing an aggressive strategy with the team, I wasn’t able to regain lost time and return to the front. The overall result is mediocre, but I won’t give anything away, especially in France in a fortnight.”

Norman Nato: “I am absolutely delighted with the win, both for myself and the team. It has totally erased the disappointment of Saturday’s race. The start was crucial, and laid the foundations for my victory. My getaway was superb and I was able to jump into the lead by taking the outside line into turn one. The only moment of panic came immediately after the Safety Car period, but I managed to control the race to the finish. I’d also like to thank the entire team for doing a great job during my pit-stop, which allowed me to retain the lead. I’m now feeling more motivated than ever ahead of the next round at Paul Ricard.”