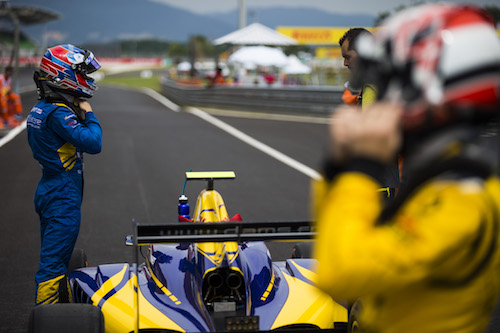 Frustrating weekend for DAMS in Malaysia

DAMS suffered a frustrating weekend at the penultimate round of the 2016 GP3 Series at Sepang in Malaysia (September 29 – October 2) as a number of incidents beyond their control cost the French squad valuable championship points.

Following podium finishes at the previous two rounds in Belgium and Italy, the Le Mans-based team had high hopes of continuing to climb the championship table.

They were still optimistic despite tyre issues in qualifying restricting Santino Ferrucci, Kevin Joerg and Jake Hughes to P12, P15 and P16 on the race one grid.

Briton Hughes was forced to retire from the opening encounter after being hit hard from behind at the first corner, and then staged a superb fightback from the rear of the race two grid to finish P12.

Renault Sport Academy driver Joerg managed his tyres well in race one, climbing to P12 by the chequered flag and setting the fourth-fastest lap.  The Swiss added P11 spot on Sunday.

Haas F1 Team Development driver Ferrucci had the worst luck of all; the American teenager suffering with standard electronic components on his car that the series’ technical support team were unable to fix, leading to his retirement from both races.

With just the season finale at the Yas Marina Circuit in Abu Dhabi to go on November 25-27, DAMS are fifth in the teams’ championship while Hughes, Ferrucci and Joerg sit P9, P12 and P17 in the drivers’ standings.

Kevin Joerg, P12/P11: “The weekend started well as I was second fastest in free practice, but we struggled to get our tyres into the optimum working window in qualifying and I started 15th, which made things quite difficult. The pace was pretty good once the tyres switched on and I was able to set the fourth-fastest lap overall and finish P12 in race one. I then finished P11 on Sunday, but following other cars closely around this circuit wasn’t easy because of the number of high-speed corners and the downforce you lose. I expected more from the weekend, but I’m sure we can end the season strongly in Abu Dhabi.”

Jake Hughes, DNF/P12: “I had high hopes coming into this weekend after the speed we’d shown at the past two rounds. We ran new tyres in practice and that perhaps didn’t give a true representation of our speed because in qualifying all three cars were outside the top 10. Despite this, I was confident that from 16th on the grid, I could still score points in race one and maybe get a position that would let me benefit from the reversed grid. Unfortunately, I was hit at the first corner and had to retire. In race two I started P21 and finished P12 so I have to be satisfied with that on a track where passing is tough. I’m confident we can end the season strongly in Abu Dhabi.”

Santino Ferrucci, DNF/DNF, said: “The weekend started pretty strongly with fifth place in practice and I was very happy with the car’s balance. But circumstances beyond our control have turned things into a very frustrating experience. After qualifying P14, I had a throttle issue that caused me to retire from the first race and then we had another issue on the pre-grid and had to pull the car into the pits. The mechanics did a fantastic job to fix things in time for me to start from the pitlane, but I then had an issue with the gearbox hydraulics and had to retire again. We have a long gap now to Abu Dhabi and I’m sure DAMS will give me a good car to challenge for strong results there.”

Francois Sicard, Managing Director, said: “We had hoped for a lot more this weekend, but unfortunately the new track surface at Sepang caused some tyre issues. Jake’s weekend was ruined when he was hit from behind at the start of race one and Santino had an issue with one of the standard GP3 electronic parts on his car, which wasn’t properly fixed by the series’ technical team and caused his retirement on both days. We finish our season in Abu Dhabi at a circuit where we have tested before, which should help us as we look to end our rookie GP3 season on a high.”