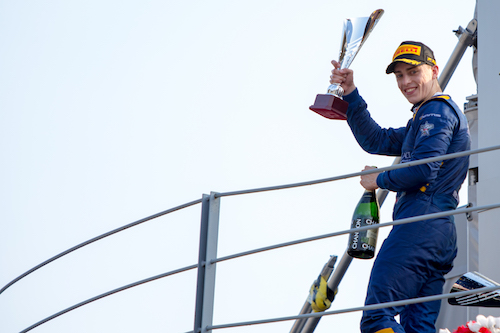 Jake Hughes produced a storming drive from eighth on the grid to seal third and another podium for DAMS, in the first of two races at Italy’s legendary Autodromo Nazionale Monza (September 2-4).

The young Brit was right on the pace from lights out in Race One. Once a move was made for P7, the 22-year-old wasted no time in hunting down those ahead, setting benchmark lap times along the way.

By lap 12, Hughes had scythed his way into fifth position and was right with the lead quartet. It took just one more tour to overhaul the fourth placed man and on lap 15 he sealed a spot on the rostrum.

Hughes then set about catching the leaders, who were on newer tyres. Despite taking significant time out of the lead duo, with the lap count running out Hughes had to settle for an impressive third place.

Santino Ferrucci and Kevin Joerg endured mixed fortunes in the opening race of the weekend with 19th and a non-finish respectively but their fortunes improved somewhat come Race Two as the three DAMS drivers brought the cars home in formation, led home by Hughes in 10th, who had suffered damage early on following contact.

Ferrucci, the Haas F1 Team development driver, turned things around with a hatful of overtaking manoeuvres, moving his DAMS machine into 11th. Joerg had shown his true pace on Saturday morning in an impressive qualifying session that saw him fly to sixth and after a difficult opening race, a battling display yielded 12th position from 20th on the grid.

The DAMS trio left Italy encouraged by strong pace ahead of the next round of the GP3 Series season at Sepang (September 30 – October 2). DAMS are fifth in the Teams’ Championship; Hughes lies eighth in the Drivers’ standings, Ferrucci is 12th and Joerg 17th.

Jake Hughes, P3/P10: “The things we changed after the summer break to improve our one lap pace seem to have worked again. We were quickest in practice with a couple of mistakes and thought we had something in hand for qualifying. The red flag came at the wrong time, so by the time the session restarted we had one lap with the tyres not in an ideal place. Without a tow, we managed P5 which was as good as we could have done. In the opener, the car was just unreal. I was passing people and carved up to third in no time, catching the leaders who were on newer tyres. That proved we had the quickest car and we were confident for the race. Unfortunately, I suffered contact at the start – nothing I could have done and dropped down to last. With damage, we came back to P10, so it’s ‘what might have been’. Overall, we are happy. We didn’t get everything we wanted but Race One was unbelievable. With a clean weekend we can challenge anywhere.”

Santino Ferrucci, P19/P11: “I felt a little on the back foot even coming from Spa where we had a fantastic result. I wasn’t really expecting to struggle in terms of results like we did here at Monza. We had to overcome some hurdles and in qualifying it came down to who got the biggest slipstream. We were running alone and with the red flag, we were unlucky. Race One, we had a good start but I could not keep my position. I went off the track at the end of the race and finished last. We turned it around in Race Two to finish just outside the top 10 so I’m happy to leave here like that. We’ve still a lot to learn in terms of how we approach things.”

Kevin Joerg, DNF/P12: “It’s another weekend without scoring points. Myself and the team did a good job in practice and qualifying. We had the performance in the opener but we had a temperature problem and we had to pit – I lost a couple of laps. It was a shame but there wasn’t anything we could do. In Race Two, we looked good and managed to get to P12 from P20. The positive was that in qualifying our speed was good. We’ll focus on Malaysia now.”

François Sicard, Managing Director: “We showed again that our car is strong over the entire weekend. Since Spa, we’ve made progress on understanding the tyres – making sure they’re ready for the first quick lap. Santino did well to climb through the order with some fine manoeuvres. Kevin better understood how the tyres work once again after his improvement in Spa. The red flag was a shame in qualifying. The car was there and Jake showed we had the pace in race conditions. We can’t wait for Malaysia. We have put all elements of the puzzle together and the hard work over the summer is paying off – we’re competitive and we’re with the leading teams.”