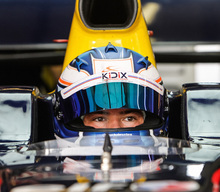 Stoneman and de Vries with DAMS in 2015

“The fortune of men is like a wheel and the same are not always at the top,” said Herodotus. DAMS, though, contradicted the adage of the famous Greek historian last year as the French team retained the two titles – drivers and teams – conquered in 2013. And the Le Mans-based squad has every intention of continuing in the same vein in 2015! To achieve this DAMS has taken on two new young chargers to defend their crown, Nyck de Vries and Dean Stoneman. Both are debutants in the category, but they have already given a brilliant demonstration of their skills in the no-holds-barred scraps in single-seater racing so they are ready to fight off the attacks of their hungry rivals.

De Vries was born in Sneek (The Netherlands) on 6th February 1995 and he is one of the coming men in Dutch motor sport, which is on an upswing at the moment. Like many of his fellow drivers his destiny was sealed early on. He was only 4 years old when his parents gave him a mini kart. Built like a jockey and gifted with exceptional talent he soon reached the top in kart racing. In 2008 and 2009 he clinched the German and European titles in KF3. The following year he won the KF2 world championship, and in 2011 he was world champion in KF1. It was obvious that such star material would soon catch the eye of a major team, and in 2010 he signed a contract with English squad, McLaren, which is masterminding his career. In 2012 he made his debut in Formula Renault 2.0, and two years later he won both titles in the Eurocup and the ALPS. This year he is continuing his climb to the top with DAMS.

His team-mate’s career hasn’t followed such a clearly-defined path. In fact, his is a pretty amazing story. Dean Colin Stonemen was born on 24th July 1990 in Croydon in England and he too began racing in karts. In 2006 he had his first taste of single-seater racing in the BARC Formula Renault Championship. He then moved up to the English FR 2.0 Series in 2008 and 2009 finishing both seasons in fourth place with four victories to his credit. In 2010, he won the Formula 2 Championship beating Jolyon Palmer, and when he was just getting ready to take the next step up the ladder into Formula Renault 3.5 he was diagnosed with a cancer. His fighting spirit showed itself as he conquered the disease and started racing again in 2013. He had lost none of his skills and his motivation had increased one hundredfold. In 2014 he filled the runner-up spot in GP3 behind Alex Lynn, who will be racing with DAMS in GP2 this season, scoring five victories. The cherry on the cake is the fact that he has obtained backing from Red Bull in 2015, and he looks like being one of the major players in the F.R 3.5 Series.

Jean-Paul Driot: “After our four titles in the last two seasons we must remain humble given the quality of our rivals, but we must not lower our sights. This is why I’m delighted to welcome Nyck and Dean to DAMS this year. They are both very talented drivers with very different career paths; they have considerable experience so they will really be a top-class duo. It’s also very satisfying to see that prestigious teams like McLaren and Red Bull continue to entrust DAMS with their budding champions. Thus, we’ve got the right weapons to enjoy a really great season in 2015 and defend our titles.”

Nyck de Vries: “I’m very pleased to be joining a great team like DAMS. It has enjoyed so much success in the past few years, and it’s really impressed me by its professionalism and the quality of its work. I know that a lot is expected of Dean and I. Personally speaking, I feel I have to go through a learning phase that begins by getting to know the team and the car really well. Then I have to build up my experience in the championship without setting myself any particular aims in the opening rounds. But I intend to gather momentum in the second part of the season and score some top-three finishes.”

Dean Stoneman: “Joining such a fantastic team as DAMS, the reigning double champion in Formula Renault 3.5, is a fantastic opportunity. I would never have imagined it at the same time last year. So this year is the one in which I really have to make my mark. I’m back where I was four years ago before my illness. In fact, I’m much better placed thanks to the backing from Red Bull, and I’m in the best team in the championship. I’m going to give it my best shot, fight for places in the top five or the top three in the opening races and then for victory as soon as possible. We’re going to be up against some very tough rivals, but I’ve got great confidence in the team and I’m ready to fight at the front.”